A sudden fire in 2012 took everything away from Angel Genelli – her home, her sister who died in the blaze, her job, and all sense of hope.

But she soon found The Salvation Army Reed House, a supportive housing facility in Philadelphia for individuals dealing with physical and mental health disabilities. After spending many holiday seasons with the Reed House depressed, this year, Genelli is finally getting into the spirit again.

“I was so mad at God for taking my sister,” said Genelli. “But The Salvation Army has helped ease that pain over my time at Reed House.”

Still residing at Reed House, Genelli has integrated well into a community of 60 residents at the supportive housing facility, one of five main housing locations owned by The Salvation Army in Greater Philadelphia. She has been taking cooking, painting and art therapy classes at the facility, and has even participated in Bible study to regain faith. 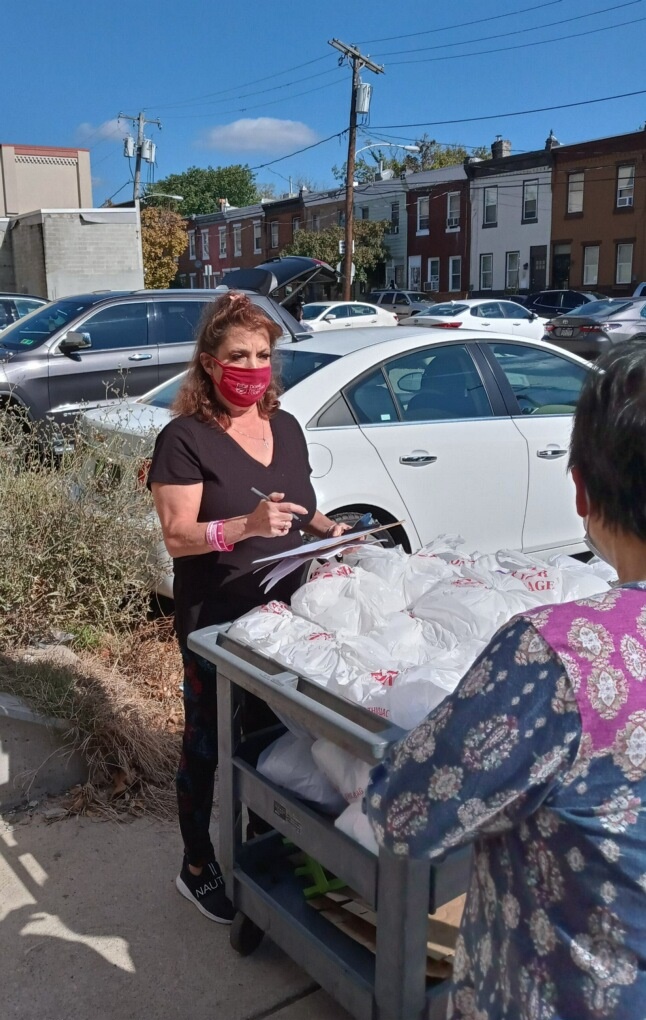 At the same time, Genelli has struggled with chronic kidney disease and other medical issues during her time at Reed House. And although she has been served at the supportive housing facility since long before the pandemic, the global health crisis has impacted Genelli’s depression, interfering with her ability to sleep at night.

Genelli’s life is turning around, thanks to the help from staff at The Salvation Army Reed House. She received help with obtaining medical and dental insurance and disability benefits, and was connected with a dietician to help her manage her kidney disease.

After losing her job of 13 years following the house fire, Genelli was eventually offered an opportunity to volunteer at The Salvation Army Philadelphia Central Corps, across from the Reed House. She now volunteers there six days a week completing a range of tasks.

“I write spreadsheets for the after-school program,” she said. “I also run the senior program. On Fridays at noon, we make lunch and I take it outside to serve to the public for free. Everyone knows me as The Salvation Army Lunch Lady.”

The supportive environment and sense of community within The Salvation Army Reed House has even encouraged Genelli to give Christmas another chance, after not believing in the holiday for so long.

“They got me back into it again, she said. “I’m decorating, doing the Angel Tree, singing, ringing the bell…all that stuff. They cheered me up.”

This holiday season, Genelli and her team organized a “Thanksgiving Christmas” event for the surrounding community by giving out meals they have prepared to individuals in need, as well as collecting toys to give to underserved families with children. The Reed House each year organizes a holiday door decorating contest, which she has taken part in this year.

“For a while I just didn't want to participate in Christmas,” she said. “I didn't even acknowledge Christmas. But now, I am happy and festive.”

Perhaps most important, Genelli found a home at Reed House. Like Genelli, many community members in Philadelphia region have lost their homes due to various reasons. The pandemic, in particular, has made it difficult for families to keep up with rent, putting some out of their homes and leaving others at risk of eviction.

The Salvation Army, however, is in the midst of collecting toys and raising money in its Red Kettles this holiday season, to ensure “Hope Marches On” for those who are homeless and for all individuals in need. Funds raised will not only help The Salvation Army provide holiday assistance – it will also help the organization continue to serve individuals in need year-round.

“Through Angel’s touching testimony, we want our struggling community members to know that there is hope, even in the darkest of places,” said Major Tawny Cowen-Zanders, Divisional Secretary for The Salvation Army in Greater Philadelphia. “The Salvation Army’s doors are always open for you, this holiday season and beyond.”

Genelli, with the help of The Salvation Army, was able to find hope this holiday season and encourages those struggling to keep their heads held high.

Donations to help those who are struggling from homelessness, hunger and poverty can be made to The Salvation Army in Greater Philadelphia’s Virtual Red Kettle.