'Astronaut' on a motorcycle 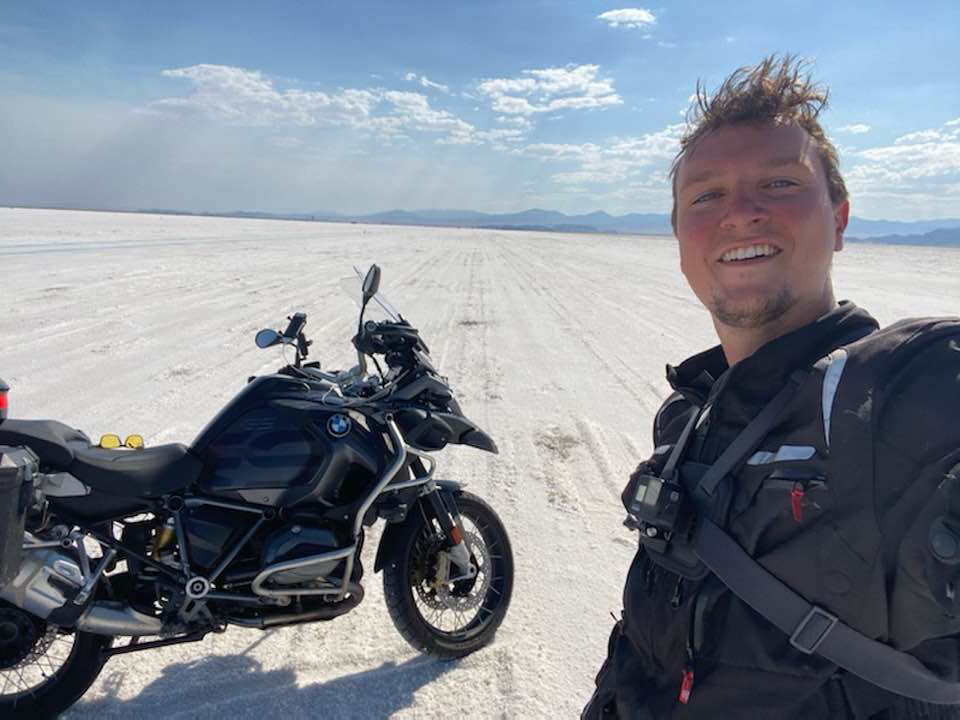 Tom Furman is an adventurer who certainly embraces challenges.

The 29-year-old Hoboken, N.J., resident has ridden his motorcycle in some daring places, including a 400-mile loop in northern Thailand. Last summer, he drove through the Himalayan mountains in northeastern India.

"This summer I wanted to do something equivalent, if not grander," Furman said.

Furman decided to accept the difficult challenge of riding a BMW R-1200 GS Adventurer motorcycle across the 48 continental states in just 10 days to raise money for The Salvation Army’s COVID-19 relief efforts.

The trip was made through the auspices of the Iron Butt Association, a group dedicated to safe, long-distance motorcycle riding.

"I wanted to pair this challenge with a fundraising event for The Salvation Army, an organization that I work closely with and have a lot of love for. I knew the money would go toward great efforts in local communities."

Furman works with The Salvation Army through his employer, Verizon Wireless. If you’re an officer or employee in the Eastern Territory and have a work-issued phone, he probably worked on the account.

"I had some vacation time pent up from Verizon and I thought, why not do something great during these unprecedented times and raise funds for an organization that does the most good for others?"

"I completed it within the 10-day period with 23 minutes to spare," he said.

The last stop was in Killingly, Conn., and ironically, right near a Salvation Army family store. When it was all over, Furman stopped to take photos with the staff there.

Furman had bought a hammock because he planned to sleep outside during the journey, but he finally opted for cheap hotels.

"I realized that a Super 8 motel was like a 5-star Hilton," he said.

He kept himself nourished by eating trail mix for breakfast and lunch. He ate fast food for dinner.

Furman, a Christian, saw good weather most of the trip and believes God was watching out for him.

"Somehow, I had spectacular weather," he said. "Most everywhere I traveled, I just missed a hurricane, a wildfire or a terrible rainstorm. As I approached storms, they would always push further away."

"I feel God’s presence a lot, but on this trip, I feel like His hand was guiding me every minute."

The odyssey did have a couple of what Furman called "miracle moments," including running out of gas in the Wyoming desert. The nearest gas station was 60 miles away.

"Two people popped up out of nowhere who happened to have a canister of gas and they were Christian missionaries," Furman said.

The missionaries quickly filled his tank and got him on his way.

In Chicago, Furman ran into a bad lake effect rainstorm that delayed his progress and forced him to do 1,400 miles in a 24-hour period to keep pace. Meanwhile, one of his tires was about to blow and he needed to swap it out.

"Every store was closed except for one that was two hours away. They stayed open late to help me," he said.

The store workers were familiar with the Iron Butt Association and quickly got Furman back on the road.

"I don’t believe anything in life is coincidental. This trip lasted 240 hours," Furman said. "God was watching out for me."

Furman was raised Catholic in Easton, Pa. About four years ago, a college friend invited him to attend Timothy J. Keller’s Redeemer Presbyterian Church, whose downtown location meets at the Salvation Army’s Centennial Memorial Temple on 14th Street in Manhattan.

At the time, Furman was focused on work and had let his spiritual life wane. The night before he was supposed to attend church, he stayed out late and got little sleep.

"I somehow woke up naturally and fully energized," he recalls.

Furman caught a last-second train and got the last seat in the auditorium that morning.

"The service was incredible," he said. "I remember I was actually brought to tears when I went back home. I felt the Holy Spirit at work within me. Ever since that day, I’ve had a much stronger relationship with God.

"That really reignited my spiritual life and my relationship with God. Ever since then, I’ve continuously gone to church and it’s really made a complete change to my life. It’s incredible.

"In going to different Bible studies, my view of life and how God is intertwined in everything, has shifted my outlook and what I want to do in this world. It’s shifted my view of what I think my purpose in this life is, which is to do everything in my power to be the best I can be and have the most positive impact on others."

That’s what convinced Furman, more than his wanderlust, to mount his cycle and head off across America. While he traveled alone, he never got lonely. Every stop, Furman would take selfies with the locals and post them on a Facebook page called "Just go with the flow."

"I was having the time of my life every second of this trip," he said. "Being on the motorcycle, I feel like an astronaut on a rocket for 15 hours a day. Or imagine riding a rollercoaster for 15 hours a day through landscapes that you never dreamt possible, like a completely different planet. Pair that with getting to meet so many people at every stop and have a human connection with somebody from a different part of the country.

"I met many musicians, artists, and businessowners and we all connected over social media. I would shout them out and they would repost things about me. It was really inspiring to witness the hub of activity and embrace ‘creation in action’ across the United States.

"Hopefully, this trip will unite people within our country and inspire people to do amazing things."

Furman, who also does a lot of glacier mountaineering, now has his eye on traveling to Argentina to climb Aconcagua, one of the Seven Summits and the highest mountain outside of Asia.

"I’m always looking for the next challenge," he said.

Tom Furman is still accepting donations. You can donate any amount in a safe and secure way by going to his fundraising page.

His Facebook page can be found at "Just go with the flow."