My journey began when a kind woman decided one day to drive the Women’s Ministries van and asked me and my mom to go with her. Her name was Mrs. Payne. She attended the Hartford Citadel church in Southern New England. This made me feel special; I was a 3–year–old and invited to the same place as my mother. We both discovered the Army together, and Mrs. Payne became like a grandmother to me. Later, when I went to the Army’s College for Officer Training, her own granddaughter, Captain Barri Vazquez–Muhs, was my sessionmate.

At Harlem’s famous Apollo theater, I participated in a singing competition when I was 19. Before my performance, I rubbed my hands for good luck on the famous “Tree of Hope” stump, as do all the performers. Then I looked to the crowd. They were loud and excited, as seen on TV. I sang Diana Ross’ “Home,” from the movie “The Wiz,” and won the competition. I was asked to return to compete another day, but I realized that God wanted me to use my voice for Him and His glory, rather than for fame. Two years later, I competed at The Salvation Army Star Search showcase. I sang where God wanted me to sing, and again, I won first place. I feel most comfortable behind a microphone or with my hands on piano keys, because I know that I’m using my talents to help usher others into the presence of God.

My mother was diagnosed with stage 4 lung cancer in August of 2020. As a pastor, I was allowed to visit her in the hospital. When I arrived, she was asleep and intubated. I sang the song “Wind Beneath My Wings.” It was always my song for this strong, single mother. As I prayed, she opened her eyes for the first time since being intubated. I truly believe that all the circumstances in my life led to that moment in the hospital when I saw her wake up. Six months later, my mother passed away. But this time, her family was by her side. The last thing I did for her was sing the chorus of Tina Turner’s “(Simply) The Best.” It’s the UCONN Lady Huskies basketball team song and they were my mom’s favorite team.

Lieutenant Tatyana Rivera, my daughter, gave us this verse of Scripture during my mother’s most difficult days. “Have I not commanded you? Be strong and courageous. Do not be afraid; do not be discouraged, for the Lord your God will be with you wherever you go,” (Joshua 1:9). It reminds me to never feel discouraged or terrified when the world becomes too much to handle or I feel like I’m making mistakes in life or ministry. The Lord commands us to be strong and courageous; not through ourselves, but through Him. He is with us in our homes, our corps, the hospital, and even while performing on stage. Though we live in the unknown, we continue to serve a known God.

As a child, I suffered from anxiety. In high school, I was always too nervous to find someone to sit with at lunch. I would take my food to the music practice room, pick out a songbook, and eat while I taught myself to play piano. Today, I can play without ever having had a single lesson. When I felt the most uncomfortable, the Lord spoke through His Holy Spirit and helped me cope during difficult times. Although I still have days where I wrestle with anxiety, I am assured that my Lord and Savior loves me and has a plan for me. All I need to do is trust Him with my whole heart and He will make my paths straight (Proverbs 3:5–6). 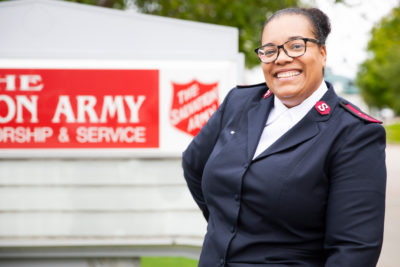 CAPTAIN LENISSA RIVERA, pastor at The Salvation Army’s Newport, R.I. church, talks about performing live at the Apollo, learning piano during school lunch hours, and how music has become the gift in her life that has kept on giving.