Black officers have the capacity to lead in any community, not just black communities.” Commissioner David Edwards

Commissioners David and Doreen Edwards began their Salvation Army careers in Jamaica and Trinidad. They served many years in the Caribbean in roles such as the principal and finance director at the College for Officer Training. They were assigned to the Eastern Territory as the assistant chief secretary and director of the Overseas Child Sponsorship Bureau. As Lt. Colonels, David from Guyana, and Doreen from Barbados were soon recognized for their outstanding leadership at the Black Officers Hall of Service at the Brooklyn (Bedford Temple), NY Corps. The Hall encouraged both children and young adults to see themselves as leaders in The Salvation Army. 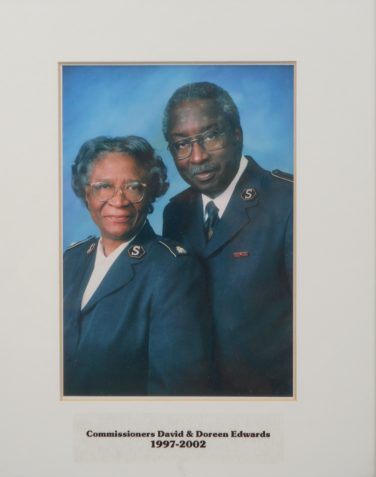 A short time after their appointment to the Eastern Territory, the Lt. Colonels were appointed to serve in the New Jersey Division with Lt. Colonel David as the divisional commander and Lt. Colonel Doreen divisional director of Women’s Organizations. One year later, they were called to The Salvation Army International Headquarters in London, England as the undersecretary for the Americas and the Caribbean and the zonal secretary and Women’s Ministries secretary for the Caribbean.

During their rise to leadership, as the territorial commanders of both the Caribbean and the Western Territories, they participated in discussions with Black leaders that acknowledged the Army’s past, current, and future inclusion of Black leaders. Commissioner David stated, “Black Salvationists are distinctive in The Salvation Army, they are not a ‘special needs’ group.” He continued, “In many ways, they have the same needs as everyone else. Whether they be Black or white people, they need to be treated with respect; they need to be given the opportunity and should not be judged by the color of their skins or their racial origins.” Commissioner David guided his territory to think beyond standards and think in terms of partnerships. He felt this new approach to ministry could meet the needs of the community by recognizing the people served.

Commissioners David and Doreen Edwards served for nearly ninety years of combined service, as recognized at their retirement ceremony in 2002. They were celebrated for their courage and dignity and their vision of The Salvation Army.