Delilah Collier proved more than a capable teacher, mother and Salvationist. In 1977, she helped launch the Eastern Territory Black Ministries Committee to discuss issues and advise goals for inclusion of Black officers. She and fellow committee members advocated for further training and curriculum to prepare Black officers for leadership positions. They spoke for and legitimized the Black community within The Salvation Army. In addition, she served on the curriculum committee at the School for Officers’ Training as a voice for the unique challenges Black cadets would face once they became officers. 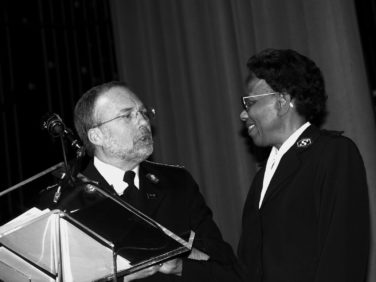 For more than 50 years, Delilah was a faithful and dedicated soldier of the Hartford (Citadel), CT Corps, unwavering in the support of her corps officers. She was a fierce prayer warrior and had the spiritual gift of hospitality.

She raised seven children and her three very young brothers after her mother died. Though living in public housing and receiving welfare, Delilah opened her home to others. She never turned anyone away or gave indication of limited resources. One year, her son who was a cadet invited 10 other cadets for Thanksgiving dinner; without blinking she said, “Of course, tell them to bring sleeping bags, and we’ll figure it out.” Cadets featured daily in her prayers and she would often send them cards of encouragement, tucking in money which, quite often, was exactly what they needed.Delilah was admitted into the Order of the Founder (O.F.), the Army’s highest honor, in 2002 for her multicultural work, local officer training and evangelism. Receiving the award, she said, “We don’t know the full joy of the Lord until we can fully surrender all to Him. If we can just be faithful, if we can just be willing, if we can go in the power of the Spirit, God will take care of everything for us.”