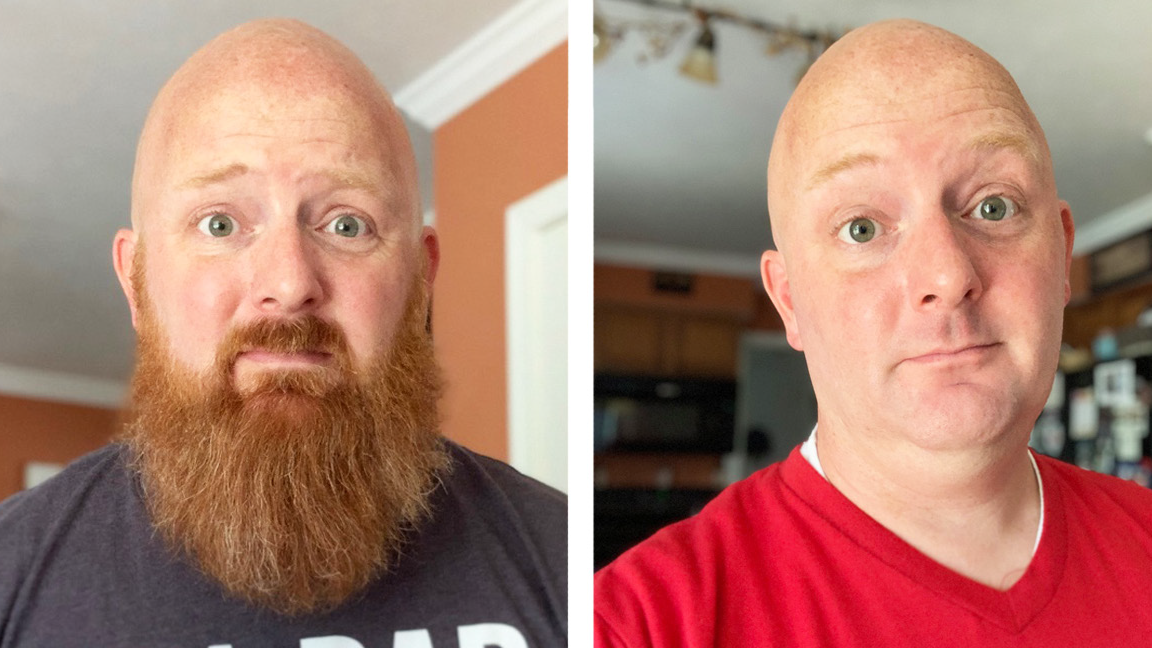 Keller, who also serves on the advi-sory board for The Salvation Army in Batavia, began toying with the idea of chopping off the scruff when the warmer temperatures arrived in early June.

“It was pretty long and it’s hot and we’re wearing masks now here in New York, so I decided it was probably time to shave it,” Keller said.

“It was pretty long and it’s hot and we’re wearing masks now here in New York, so I decided it was probably time to shave it,” Keller said.

Keller’s church partners with The Salvation Army on several projects, including a once–a–week mobile food pantry to feed people affected by COVID–19. The more he thought about cutting the beard, the more he wondered if he could help raise money for The Salvation Army by doing so.

He first proposed shaving in exchange for $500 in donations from his Facebook followers.

“When I initially wrote the idea, I put the goal at $500, but I wondered if maybe that was too lofty,” Keller said.

Then Keller and his three daughters went for a short walk in their neigh-borhood. By the time they returned home, his followers had donated a total of $400.

Keller then upped the ante: If the total reached $1,000, he would let his daughters do the shaving. He didn’t make it by a whisker; he made it within hours.

“I put that out there and thought it might take a few days, but it was only three hours after the initial post that I hit $1,000,” Keller said. “It was really cool to see.

“I’ve joked that there are plenty of people in my church who are over my beard, but really this is a vote of confi-dence for our Salvation Army.”In all, Keller raised $2,215 in five days for The Salvation Army.

“I was stunned,” he said. “It was far beyond my wildest expectations. It was really cool to see so many people rally around something fun and light when things have been pretty serious. Food scarcity is a real issue in our community.

“It’s just been encouraging to see people step up for others in our area who don’t have all the food that they need.”

Lieutenant Bradley Moore, who oversees the Batavia Corps along with his wife, Lieutenant Rachel Moore, said Keller’s Northgate Free Methodist Church is the largest church in town and has “always been an excellent partner.”

“I was blown away at how quickly he raised as much money as he did,” Moore said of Keller’s fundraiser.

Moore said the money will go to buy food and to help people with rent assistance and general social services. The need for food has increased during COVID–19. Moore said the corps has gone from helping 25–35 families a month to 25–40 a day.

“Early on in the pandemic, we were seeing even more than that,” Moore said. “We’re seeing as many people in a day as we typically would in a month.”

“I wanted to make sure that partnership was more than just money,” Keller said. “I thought being a pastor on their board would really just solid-ify that connection.

The Army Makes the Cut

“I wanted to make sure that we were really deeply involved with the work The Salvation Army does in our community. I know it’s a slogan, but in our community especially, they do the most good. They really do. They care for so many people.”

Moore said the churches play to each other’s strengths in their alliance.

“They’re intentional,” Moore said. “They do church really well on Sundays. They want us to do what we do really well. They refer people to us for social services.”

Keller agreed, saying, “We could start a lot of programs, but why when some-one else is doing it really well? Why not just partner and help them do better?” Keller said the Moores “do an incredible job” in Batavia “and our community knows it.”

“So many people in my church and the community itself just love The Salvation Army. I decided to take it as a vote of confidence for them that we raised $2,215 and not that everyone hated my beard that much.”

Keller hinted that his fundraising days for The Salvation Army might not be over. That could mean he’ll be sport-ing the lumberjack look in the future.

“It took me eight months to grow that beard,” he said. “I could do this every year. If people would rally around like this every time, I certainly would.

“We have a really extraordinary branch of The Salvation Army in our area. People want to give something when they know it’s well run and serving people well.”