Mourning Together in Fairmount 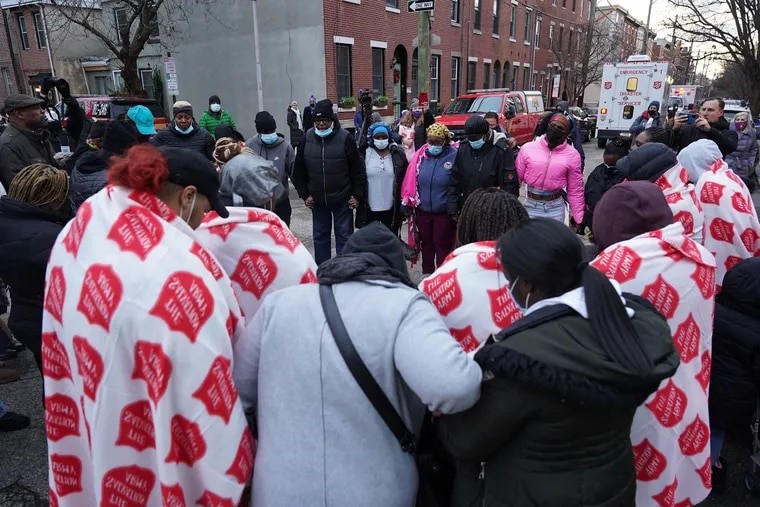 One of the deadliest fires in the history of Philadelphia has brought families together to mourn the loss of their loved ones.

It has also brought The Salvation Army to the scene with two simple words: “We care.”

Immediately following the fire on the morning of Jan. 5, which burned down a row home in the Fairmount neighborhood and killed 12, including eight children, The Salvation Army dispatched personnel from the Eastern Pennsylvania & Delaware Division’s Emergency Disaster Services (EDS) team. Joining them were staff and volunteers of The Salvation Army in Greater Philadelphia to care for all who were on the scene.

“What happened is just horrible,” said Major Tawny Cowen Zanders, Divisional Secretary for Greater Philadelphia. “We are mourning alongside the families and friends of those who lost their lives tragically in this fire. The Salvation Army wants them to know that we are here.”

Officers of The Salvation Army in Greater Philadelphia provided pastoral care to mourning family members and friends at the scene on Jan. 5, and continued to do so in the days following. Members of EDS provided feeding and hydration support for the first responders on the scene, as well as for the families.

The Salvation Army Eastern Pennsylvania & Delaware Division’s EDS team covers 39 counties throughout Eastern Pennsylvania & Delaware, including Philadelphia. The Divisional EDS team has 15 mobile feeding units that are always at the ready in the event a disaster occurs. Any donations from the community inspired by the incident on Jan. 5 will support EDS in fulfilling unmet needs resulting from the fire, as well as future disaster relief efforts in the areas EDS serves.

“We are always grateful to have the opportunity to work with local first responders and organizations around the region to provide care for families impacted by a disaster,” said Luke Rodgers, Divisional Emergency Disaster Services Director. “Right now, our thoughts, hearts and support are with the families in Fairmount.”

“Please tell someone close to you that you love them,” said Major Cowen-Zanders. “Hug them a little closer. We never know what tomorrow will bring.”