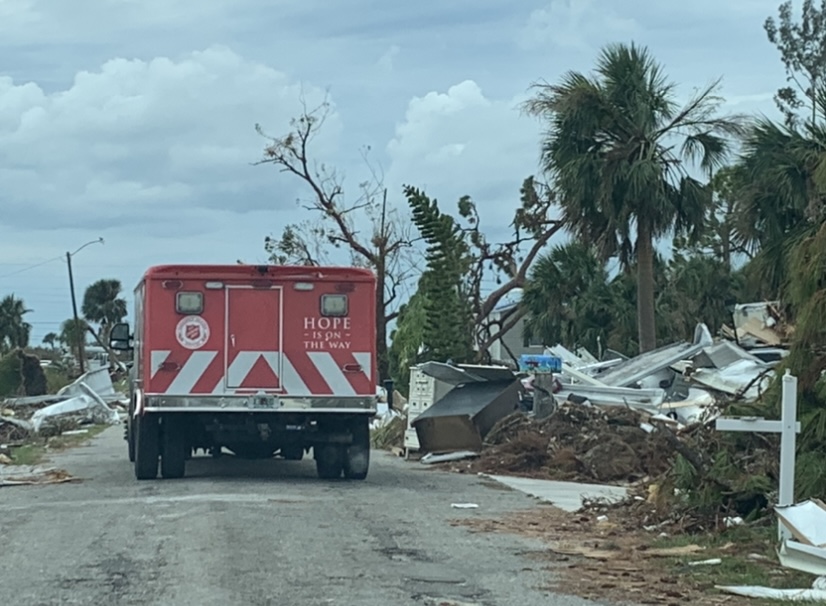 Major Tawny Cowen-Zanders was talking to her husband from amid the debris of Hurricane Ian when the phone went dead. At least that’s what her husband, Major Kevin Zanders, thought at first.

In reality, his wife, a fellow officer with The Greater Philadelphia Salvation Army, who was part of the massive effort to aid victims along Florida’s west coast, had just come upon one of the many horrific scenes left in Ian’s wake: Collapsed and destroyed homes, the smell of aging food, dead animals and busted sewer lines filling the air, the hollow and grieving faces of the victims as they sifted through the scene, seeking to salvage any and all fragments of their lives.

"I had stopped talking because I couldn’t," said Major Cowen-Zanders, who arrived on October 5 to serve as the Public Information Officer. "I mean, it looked like a bomb had gone off in this area. You see it on television, but until you can smell it, see it – even when they pan over somebody, they don’t get close enough to see the tears coming down their faces, or hear them and their stories."

The Salvation Army did. Uniquely positioned to serve before, during, and after times of disasters, members from all over the U.S. were dispatched to the hardest hit areas of Port Charlotte, Fort Myers, and Naples. Because Florida is often the target of hurricanes, there were 40 mobile feeding units already in place when the storm hit. A "strike force" caravan of 11 more units from Texas arrived immediately in the aftermath of the storm.

That is in addition to the efforts that were already underway in Puerto Rico in the wake of Hurricane Fiona. At its community centers in San Juan, Caguas, Bayamon, Mayaguez, Arecibo, Loiza, Guayama, Humacao, Ponce, Peñuelas, and Fajardo, more than 110,000 prepared meals have been distributed and over 81,000 bottled drinks. Additionally, those in need received 5,078 clean-up kits, 107 blankets, 7,286 personal hygiene kits, and 2,902 ice bags.

Not all of those hours are dedicated to physical help. Survivors and first responders not only face the physical destruction that shows up on TV cameras, but emotional damages that could impact their lives long after the storm fades from our memories. Salvation Army officers like such as Captain Marlon Rodriguez from the Lebanon Corps and Captain Jesus Corraliza from the West Chester Corps provided emotional and spiritual support to those in need of it. In Puerto Rico, Major Ismael Correa from the Allentown Corps has coordinated that aspect of the Army’s far-reaching effort.

"Sometimes it’s just that they need someone to listen," says Capt. Corraliza. "Or to give them those correct words of hope. And the way to hope is to put Jesus in the mix, someway, somehow."

Says Major Cowen-Zanders, who documented and reported on the scenes and The Salvation Army’s relief efforts during her temporary role in Florida, "It's incredibly rewarding because we've been invited in at someone's most vulnerable moment. Such as, they're standing in their yard and looking at what was once such a happy place that’s just not there anymore. You're watching them drag their things out of their house and putting them on the curb because they’re ruined. You’re seeing their life on the curb, and it’s just so sad.

We’ve been invited into those sacred moments to share a reassuring word, a gentle hand, and a sustaining pray.”

The Salvation Army’s actions in Florida reflect the organization’s everyday commitment to helping those who need a helping hand – whether it’s through food, shelter, emotional and spiritual care, or more.

"We can't snap our fingers and make the roof hold or anything like that," she says. "But what we can do is say 'we see you and you are known.' But, most important for us as a faith-based organization, we say, 'Jesus sees you. And Jesus loves you. And Jesus has sent people to walk beside you, at this very traumatic time for you.' "