“Just trying to show my kids that you can turn any situation into something good and be successful." 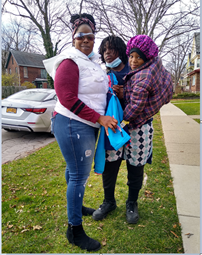 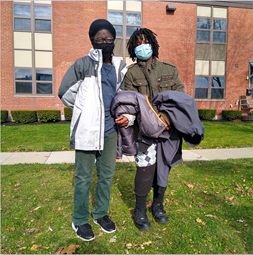 A recent graduate of The Salvation Army’s Pathway of Hope program, Trinity, is proud to share the story of her journey from being unemployed and homeless to successfully employed with a warm home for her children.

One year ago, Trinity and her two children were put out on the street by the boys’ father following a long bout of domestic violence and conflict. Trinity came to the Buffalo, NY area from North Carolina after she and her twin boys lost all their belongings when the roof of their home caved in during a hurricane. Trinity, destined to be a survivor, evacuated her boys who were 10 years old at the time but they had nowhere to go. The twin boys were sent to live with their father in Buffalo while Trinity came up with a new plan.

When Trinity arrived in Buffalo, she found her boys in a desolate situation. The boys’ father had succumbed to drug use and the children, both of whom are on the Autism spectrum, were anxious and unkept. Significant conflict between the father and Trinity led to domestic violence forcing her and the now 14-year-old boys to be homeless. With no one in Buffalo to turn to, Trinity sought out services for homeless families. The family was placed at The Salvation Army’s Emergency Family Shelter.

The family had virtually nothing when they entered the shelter. Everything they owned, including their clothing, was left with their father who refused to respond to several contact attempts. Trinity began pursuing custody, child support, and domestic violence matters, including an order of protection, in Family Court.  But the courts were shut-down in April, due to COVID-19, which kept these matters unresolved.  As if this wasn’t enough, Trinity also took temporary custody of her 4-year-old granddaughter when her mother (Trinity’s daughter) was hospitalized in North Carolina with a ruptured kidney.

Trinity was motivated to get her family stabilized by becoming gainfully employed with permanent housing.  She was referred to Pathway of Hope where the case manager, Cheryl, provided support in her search for a job and apartment. Cheryl assisted Trinity with transportation as needed for her children’s medical appointments. Trinity, rather quickly, secured a $12.00/hour per diem position as a personal care assistant (PCA), and as spring unfolded, was able to additionally obtain a second PCA position, this one at $17.00/hour.

By summer, Trinity secured transitional housing and was able to move into a safe, suitable apartment. By fall, she transitioned from the two part-time PCA jobs to a full-time position as a cashier.  Within one months’ time she was promoted to Assistant Manager.  She is extremely excited to have a job with benefits, including employee health insurance and even retirement!  She said to Cheryl “I thank God for y’all at The Salvation Army. We were welcomed in Buffalo and without you I wouldn’t have been able to get from where I was to where I am”.

The Salvation Army’s Pathway of Hope initiative provides individualized services to families with children who desire to take action to break the cycle of crisis and vulnerability that repeats generation after generation. It seeks to address the root causes of poverty in addition to The Army’s history of compassionate serving. By helping families overcome challenges like unemployment, unstable housing, and lack of education, we can lead families down a path toward increased stability and, ultimately, self-sufficiency.