In the Aftermath of Hurricane Fiona, the People of Puerto Rico Endure with Hope and Faith

“Estoy cansada.” Delia Cruz, 82, is sitting on a concrete bench in the shade. It’s a sweltering October afternoon. Delia is patiently waiting for her ride after just receiving a food box from The Salvation Army.

When asked how she’s dealing with the latest natural disaster that has hit her country, she has a two-word response, “Estoy cansada.” I’m tired. Since Hurricane Maria ravaged Puerto Rico in 2017, the island has been impacted by one disaster after another, including a series of devastating earthquakes in 2019. As the people of Puerto Rico began to rebuild from the hurricanes and the earthquakes, the COVID-19 pandemic hit. 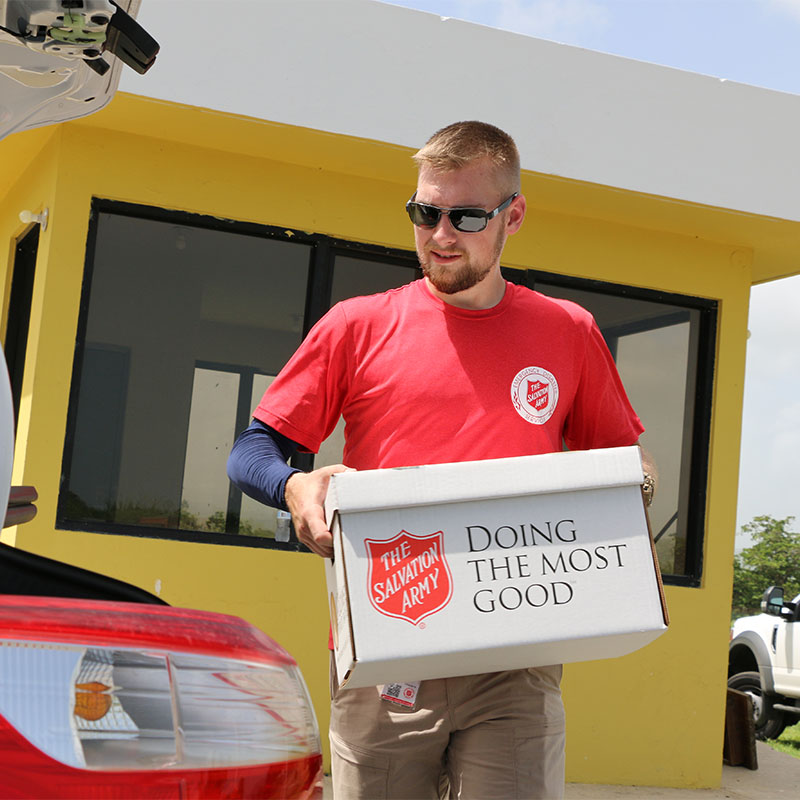 When asked how she has been able to get through so much hardship in recent years, she points a crooked index finger to the sky. “God is the reason. Thank the lord and The Salvation Army for what they have provided.”

Throughout the afternoon, there’s a steady stream of people coming through the Ponce Salvation Army to receive food boxes. The Salvation Army’s Emergency Disaster Services team works in unison with staff from the local Corps. It’s easy to forget that the staff and Salvation Army officers are also dealing with the aftermath of Hurricane Fiona.

“I know what they’re going through. I’ve been through it and can relate to them,” says Rachel, a social worker, and Salvation Army soldier at the Ponce Corps. “The Lord allowed this to happen so that I can serve in this way. The Lord is the one who supports me to do this work.”

For many people in the community, the only assistance they have received is from The Salvation Army. 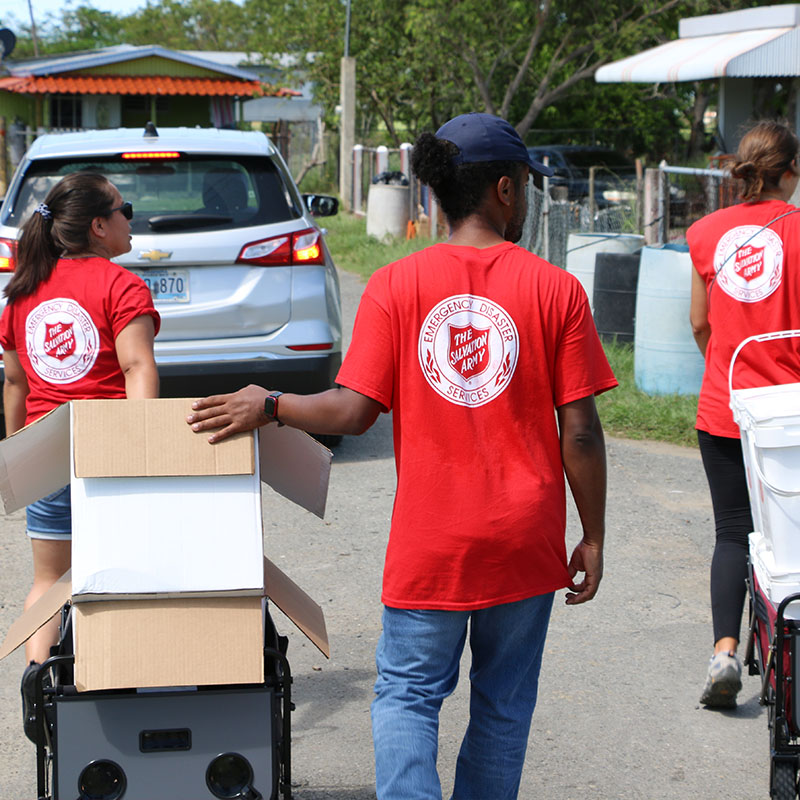 For those on the Emergency Disaster Services team, the days are long and emotional. The team consists of people from all over The Salvation Army’s Eastern Territory and it’s beautiful to see them come together for those in need. Oftentimes, the EDS team needs to get creative in order to provide support for those who need it most.

The Emergency Disaster team hoped to visit the town of Lajas, but lost contact with the community. The night before we were set to visit Lajas, a member of the team created a Facebook poll in a group dedicated to the Lajas community. Within hours, over 60 people had responded to the poll stating that food and water were needed and that parts of Lajas were still without power.

The next morning, our convoy of three trucks was loaded with water, prepared meals, and cleaning kits as we made the almost two-hour drive from Caguas to Lajas in the southwestern part of the island.

Our first stop was a small farming community. A narrow dirt road snaked its way through the neighborhood. Most houses consisted of a single floor with tin roofing. They were elevated from the ground, but for some, it was clear that they weren’t elevated high enough.

As our convoy made its way down the street, people emerged from their houses waving and smiling. Once we parked our vehicles, we proceeded to make our way down the street, stopping at each house to drop off meals, water and cleaning kits. We also provided emotional and spiritual care for those that wanted it.

Some of the people even invited us into their homes. The gratitude and appreciation they displayed will stay with me for the rest of my life.

That afternoon, we made our way to a small fishing community in El Papayo. We met with Celia Cruz, a community leader who has been instrumental in working with local officials to make sure those with special medical needs were provided with support.

“When Hurricane George made landfall in 1998, The Salvation Army were the first to arrive with support,” said Celia as tears spilled from beneath her sunglasses. "When something happens, The Salvation Army is there for the people. This means so much to us.” 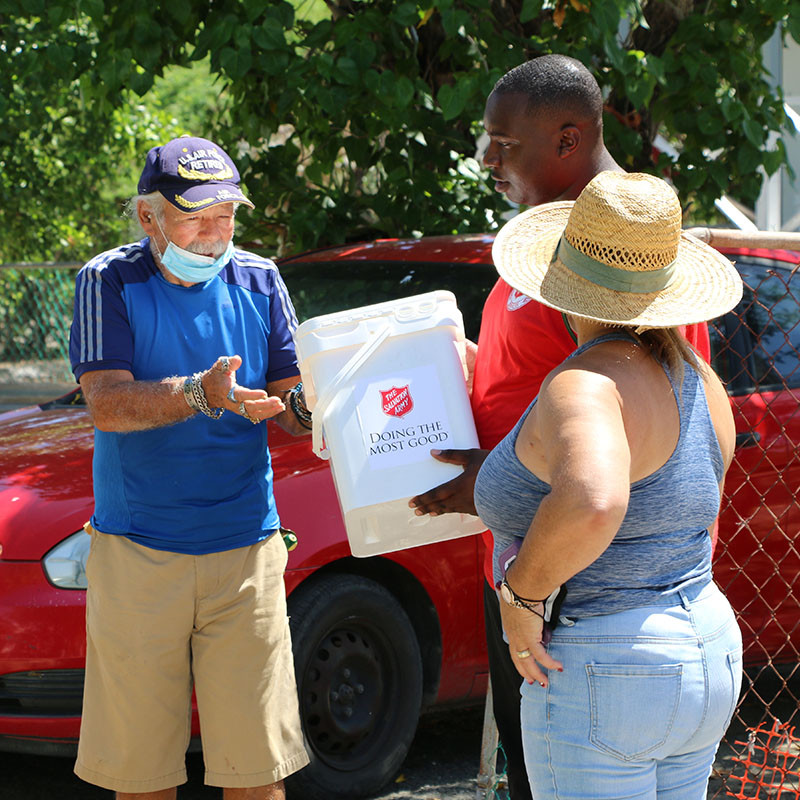 While eating lunch, we learned of a woman in the neighborhood named Marianelys who was confined to her bed. Marianelys is active on Facebook and when she learns of a specific need someone has, like a refrigerator for a woman whose house was flooded, she puts them in contact with someone who can help.

6 years ago, Marianelys had a stroke. At one point, she weighed 700 pounds. Her personality was infectious, and she was so happy to have visitors. Despite not being able to leave her bed, Marianelys is dedicated to helping those in need. 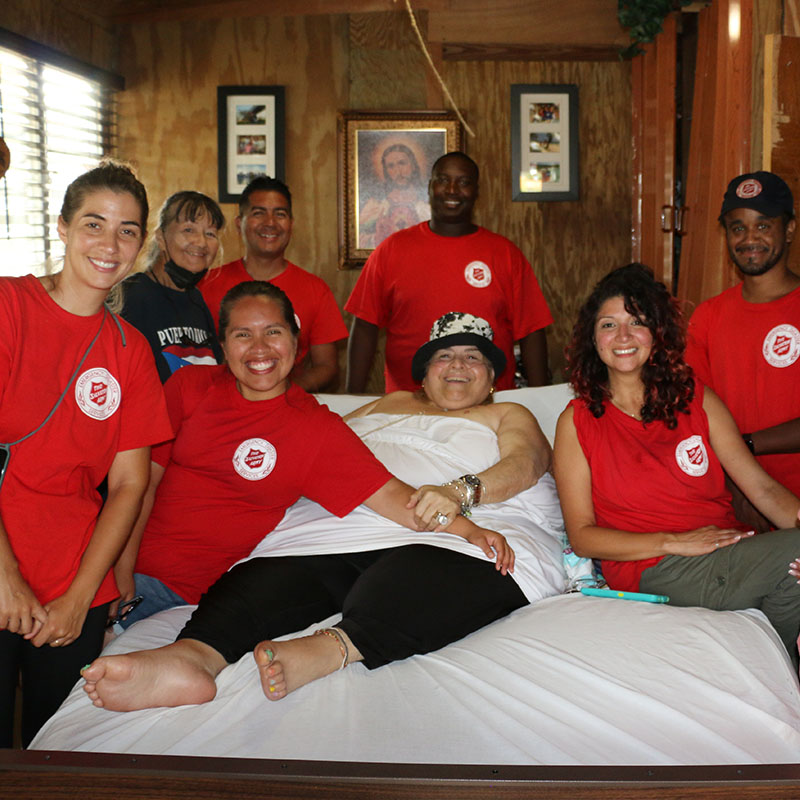 “I love to share my joy and happiness with others,” said Marianelys.

Since the start of The Salvation Army’s Disaster Response to Hurricane Fiona in Puerto Rico:

Michael Baldelli is from Wallingford, Connecticut and has worked for The Salvation Army Southern New England Division for seven years.

This is Michael’s first deployment as a Public Information Officer with our Emergency Disaster Services Team.