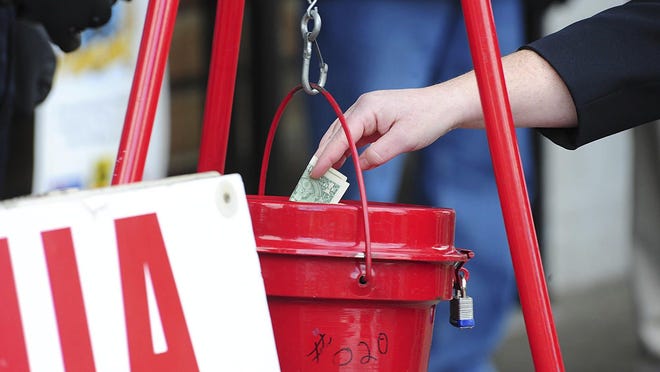 It’s bell-ringing time in our communities, which also makes it Amelia Kunkel’s time of year.

Philadelphia was home to The Salvation Army’s first U.S. mission, and San Francisco debuted the first red kettle. But the first Salvation Army bellringer? That occurred up the road 120 years ago in New York City thanks to Cadet Kunkel. Let her tell the story:

“Standing on newspapers helped block the dampness and penetrating cold,” she once said. “I was in the Battery, near Wall Street. Our kettle was by the entrance, or exit, to the ‘El’ which brought droves of businessmen to and from the financial district. Some contributed to The Salvation Army kettle; most passed by.”

Her administrator suggested she find a stick and bang on the kettle to draw attention. Amelia didn’t love that idea. So, the next day she walked into a nearby Woolworth and noticed a small bell with a short, dark wooden handle and slight tinkle. The bell cost 10 cents and a holiday tradition of joy and service to others was born.

This year is different.

This year people are tired.

This year people are stressed.

Too many people just want 2020 to be over. The pandemic, unemployment, social division, and even incessant Zoom calls have taken their toll.

Many of us are just trying to keep a brave face on as we try to keep putting one foot in front of the other. For too many, the suffering goes even deeper.

It’s for these moments that The Salvation Army came to be, and it’s why this year we broke with tradition and started our annual holiday fundraising campaign early. Call it a mission to Rescue Christmas.

The need is great. Based on current trends, we expect to serve more than 150 percent more people in 2020 with Christmas assistance — everything from providing food to paying utility bills to putting gifts under the tree.

The red kettles and the devoted army of staff and volunteers who ring the bells and exchange a smile with you on the street or even sing a Christmas carol or two make all of this goodness happen. The Salvation Army raised $126 million last year through 30,000 red kettles on street corners and outside stores across the country. The Eastern Pennsylvania and Delaware division, alone, generated $3.3 million.

This year, though, store closings, reduced foot traffic in our cities and the fact people are carrying less cash and coins are expected to result in a 50 percent reduction in kettle collections nationwide.

Locally, corporate partners such as Walmart, Comcast, Giant, Herr Foods, Wells Fargo and PECO have stepped up to help with the red kettle campaign and other programs. Their ongoing support has been vital to our ability to provide 13 million meals, shelter, and emotional and spiritual support to more than 22,000 people in the Eastern Pennsylvania and Delaware Division.

As trusted partners and advocates for the regions we serve, local nonprofits like The Salvation Army need and welcome the partnership of the businesses who believe in our communities as much as we do. We are also grateful for celebrities such as DJ Khaled, who challenged his friends to step up and support The Salvation Army and those who we serve.

We ask people to consider donating through safe digital options online or by texting KETTLE to 41444. You can even ask Amazon Alexa to donate by saying, “Alexa, donate to The Salvation Army” and then specifying the amount. To learn more or to get involved, visit pendel.salvationarmy.org.

Difficult times often necessitate innovation, and that’s what we’re trying to do this year to Rescue Christmas. It’s something Amelia Kunkel would understand and appreciate.

Thanks to Amelia, the red kettle and the sounds of the bells still embody the meaning of the season — the charge for us all to give what we can to look after our neighbors, not only at Christmas but all year round.

— Lt. Col. Larry Ashcraft is Divisional Commander of The Salvation Army of Eastern Pennsylvania and Delaware.