As the Brandywine Creek in Wilmington, Del., flooded over during Hurricane Ida in early September, residents along its banks had to make a tough call. Stay and protect their precious belongings, or abandon their rented abodes and hope for the best.

For one such resident, that decision became evident when, after seeing some water seeping through a corner of her first floor, she went to check on her laundry in the basement of her home. ``She opened the door and her washer/dryer floated by,’’ said Major Tim Sheehan, The Salvation Army’s state coordinator for Delaware. `` So she went up to one of her second-floor windows and was one of the early ones to be picked up by rescue boats driven by first responders.’’

A Salvation Army employee usually on the helping end of such catastrophes, she was among over 200 Wilmington residents rescued by boats from the storm that night. Several required hospitalization. In Coatesville, where floodwaters reached as high as the octagons of Stop signs in some places, more than 100 families became displaced from their homes. In Montgomery County, three people died during the storm, two by drowning.

In all of these places, and many more, The Salvation Army Eastern Pennsylvania and Delaware Division’s Emergency Disaster Services quickly coordinated with other local agencies to provide food, emergency housing, and access to relief services.  Beside addressing immediate needs, The Salvation Army joined other area nonprofit disaster relief agencies to set up a ``one-stop shop’’ Chester County Hurricane Ida Multi-Agency Resource Center at the United Sports Training Center in Downingtown.

The Brandywine at Wilmington crested at 23.14 feet the Thursday morning after the storm, smashing its previous record of 20.43 feet in 2014. The flooding in Wilmington stretched between I-495 and Market Street, the most significant impact extending over a 15 to 20-block area along the creek. As part of the Delaware Voluntary Organizations Active in Disaster, Sheehan responded quickly and positively to an email that Friday night asking for help and was there early Saturday to help sort things out with various other state and local help organizations.

Canteen trucks, larger than those available in Delaware, came in from The Salvation Army Lancaster Corps and The Salvation Army Wilkes-Barre Corps. Two shelters were initially set up, but efforts quickly consolidated into one site that became a resource center, dealing with insurance and repair issues, and launching canteen trucks to drive up and down the blocks providing hot meals to the affected area.

``We just kept feeding and treating immediate needs,’’ Sheehan said. ``They were still cleaning out houses. Volunteer organizations going in, mucking out stuff, filling dumpsters, dragging it away.’’ 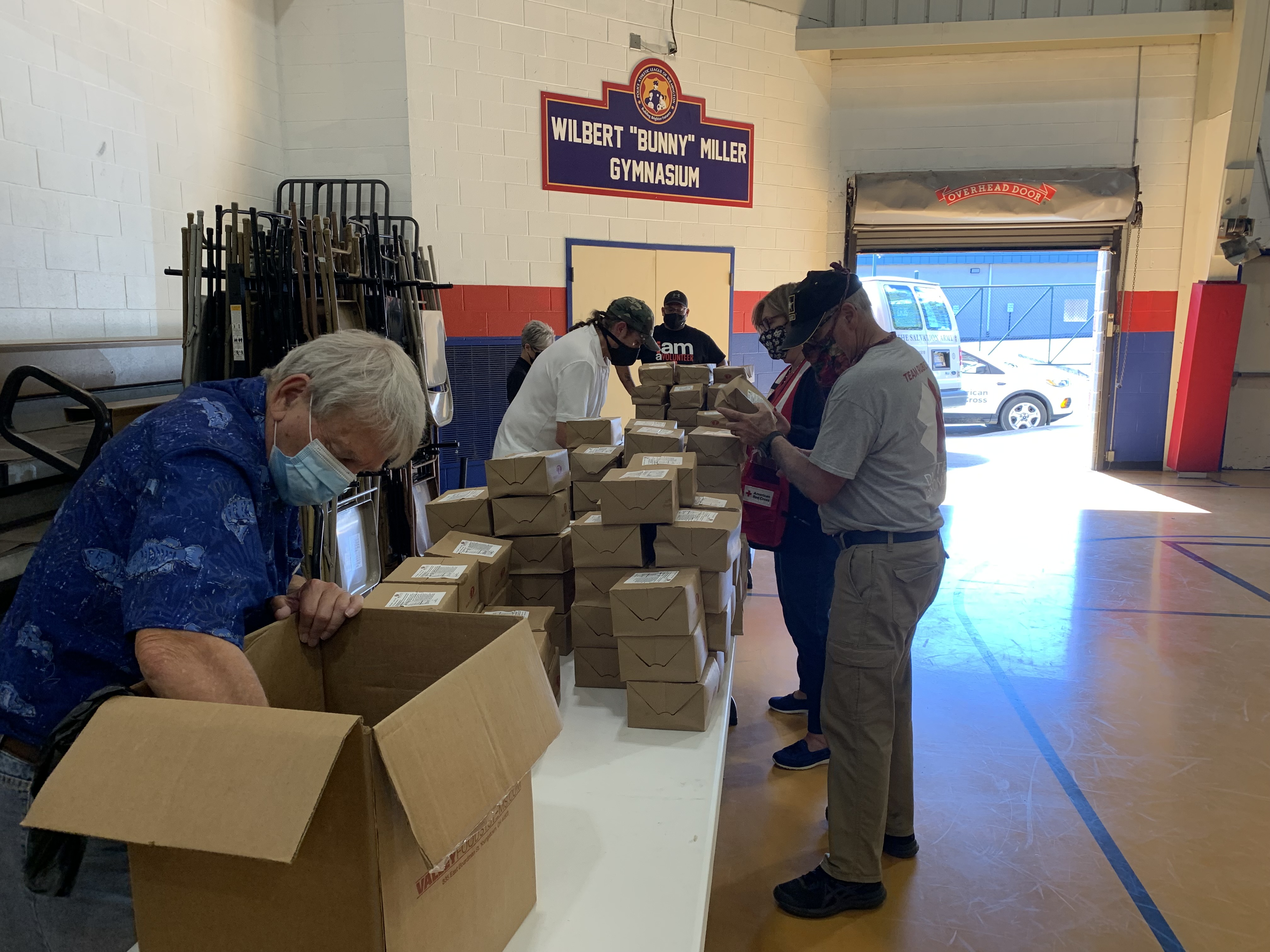 It was a similar scene when Bill Bishop and Army volunteer Jason Davis arrived in Mont Clare (next to Phoenixville) in Montgomery County. An Advisory Board Member, Bishop is the Emergency Disaster Services Committee Chairman of The Salvation Army’s Corps in Lebanon. But after the local and county department of emergency services ascertained their services would not be needed there, Lebanon’s canteen was dispatched to the small waterfront community in Upper Providence Township that is based on the overflowing Schuylkill Canal.

At the instruction of the local fire department there, the canteen set up at Fitzwater Station, a tavern at the center of the community and began feeding about 70 residents from the nearly 50 homes that were affected by Ida. Food options expanded with each day, and a local business, Lock 29, brought miscellaneous household and cleaning supplies to be distributed as well. The Salvation Army from Lock Haven, 185 miles from the site, sent its own canteen and volunteers to serve on alternate days. 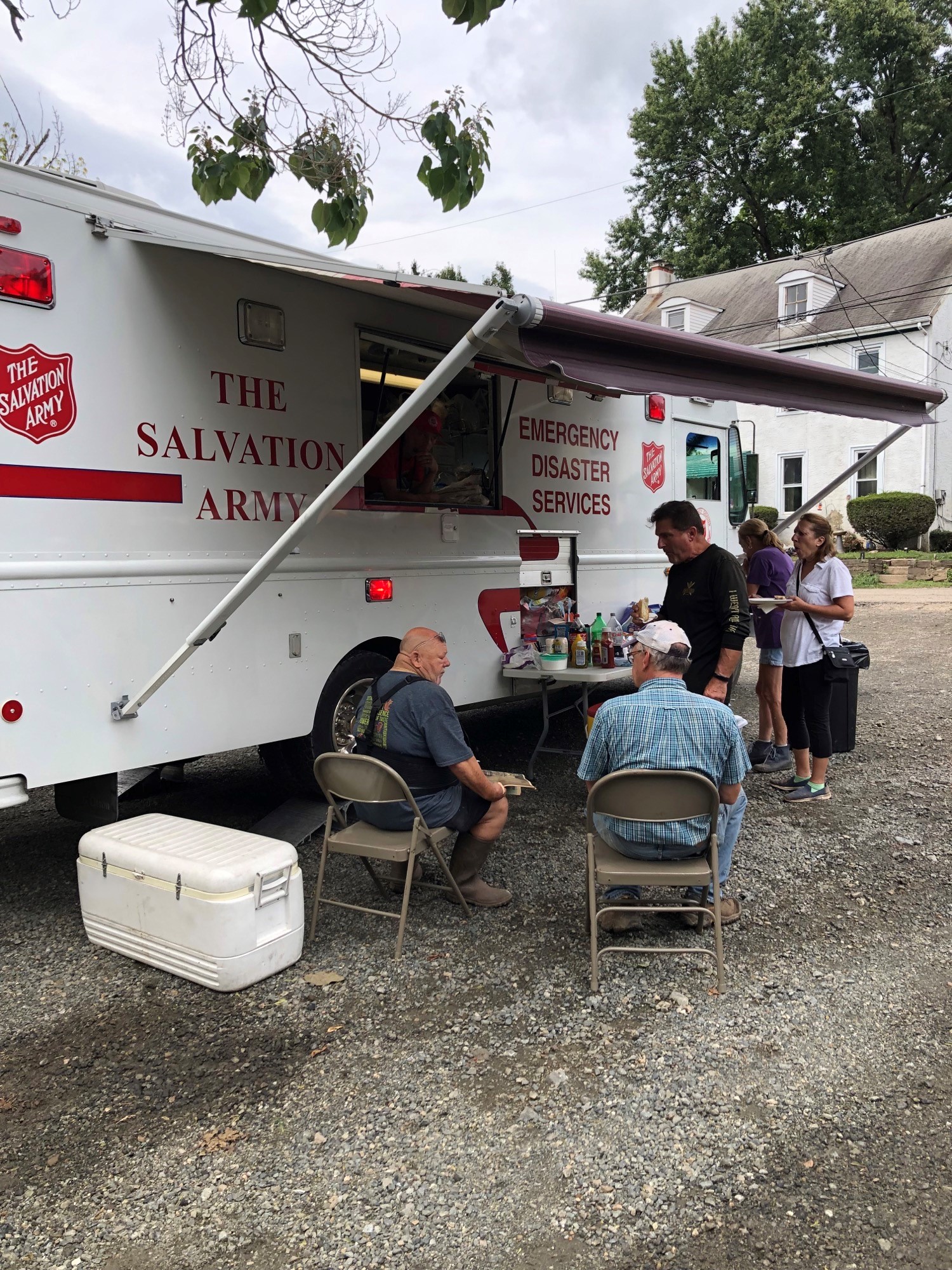 Other parts of the small community pitched in too. ``Folks had water up to their second floor,’’ Bishop said. ``People were muddy, tired, had to get rid of appliances/sofas, everything that was ruined, cutting up drywall in their house. And the township was going through it with pay loaders and collecting all of this stuff.’’

As they cut into the walls of one such house, they found a tabloid placed inside of it after the home had been rebuilt following Hurricane Agnes in 1972.

``The previous owner had signed it and wrote, `Hope you never find this’ ‘’ said Bishop. ``Unfortunately, someone did find it.

``They told a lot of stories and vented their frustrations and bewilderment because they were very tired, working hard, had basically just lost their home. And there were a lot of things they had to go through -- insurance company, contractors, phone companies -- in addition to all of the physical work they’re doing… You don’t just provide food -- you provide that relational type of experience for them. ‘’

And, said Sheehan, who has decades of emergency relief experience with both The Salvation Army and as a volunteer fireman, ``To reassure them that they were not abandoned. And keep their hope light on. We’re here. For as long as you need us.’’

The appreciation for their efforts, and those of the Lock Haven unit, was ``overwhelming’’ said Bishop.

To help The Salvation Army provide assistance to those still impacted by Hurricane Ida, visit www.salarmy.us/floodrelief.