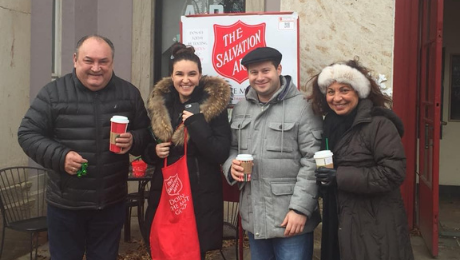 It came as a surprise to Joe Ventresca when he was approached by a longtime friend and business colleague to be the capital campaign chairman to raise funds for the construction of The Salvation Army Ray & Joan Kroc Center in Camden, New Jersey. He did not know a lot about the organization, but he was up for the challenge. “I knew of The Salvation Army in general. And when I take on a responsibility like this, I take it very seriously. So, the more I found out about The Salvation Army and the Kroc Center, the more entrenched I got and the more it engulfed me into participating.”

It was this very connection with the organization that led Joe to not only successfully raise $10 million for a new building, but also to become a major donor himself.

“The beauty of The Salvation Army is that the deeper you go, the purer you find it is and the more you realize that you’re glad you gave money to the organization. I know my donation did good and it will always do good.”

Raising funds in Camden was not an easy task. With limited access to individuals who might want to be involved and many organizations in the region focused on initiatives in Philadelphia, Joe and his campaign team often found themselves frustrated and concerned that they would not reach their goal. However, as Joe worked closely with The Salvation Army officers, volunteers and staff and learned more about the programs and services they offer to those in need, he knew they had to reach their goal to help so many in the community.

“Growing up with my family, there was always a feeling that I had support and I could fall back to someone when I needed help. Then I looked around and thought about people who don’t have family support and are out there struggling,” Joe remembers. “Who do they have? Who do they turn to? To have The Salvation Army be that ‘turn-to” organization is a Godsend. It’s something that has to happen.”

When the Kroc Center opened in 2014, Joe was proud of the efforts of the fundraising team and felt a true sense of accomplishment. But his involvement did not stop there. Joe wanted to also contribute personally as a major donor to The Salvation Army, having learned so deeply of the impact that the organization has on countless individuals – from providing food, to helping people with bad credit and lending a hand to teenagers who have lost their way.

“You want your money to go to a place you trust and know that it is being used properly and helping the organization move in the right direction. The Salvation Army means that to me,” Joe said.

Just as Joe saw a vision for The Kroc Center when he started raising money, he now looks forward to seeing how The Salvation Army will continue to provide a meaningful direction to people in the community. And he hopes that others will join him in his support of its mission. “Whether you can give $5, $50, $500, or $500,000, that donation will do good. The Salvation Army will use that money to help people. Whether it’s food, direction, or peace of mind – it will help people.”

As Joe so importantly pointed out– people get involved with non-profit organizations for many different reasons. But if they are all focused on the organization’s mission and helping those in need, they will make an impact every day.

The support of our donors makes so much happen, and The Salvation Army remains forever grateful to Joe for his leadership and generosity. If you would like to make a donation or serve on your local Salvation Army advisory board, please contact Rowena Saunders at (908) 851-8379 or rowena.saunders@use.salvationarmy.org