At its heart, The Salvation Army is a church. This foundation is what motivates us to do the work that we do. We love God and serve others because of His love for all. That’s where our mission comes from – to preach the gospel of Jesus Christ and to meet needs in His name without discrimination. Because, we want others to come to know God’s love too. These are our marching orders.

We’ve been around since 1865, originally called the East London Christian Mission. An itinerate pastor named William Booth started the organization as a grassroots effort with boots on the ground in London. He didn’t have buildings, but he did have a dedicated following who saw desperate need among the poorest of people and took to the streets to offer help. Booth referred to the organization as a volunteer army, because of the way they operated and served. As the organization grew, he used military-style rankings to describe the hierarchy of leadership. Leaders adopted a uniform apparel that mirrored military styles. Their mission was to serve others in Jesus’ name, meeting not only their physical needs, but also their spiritual needs. Booth described their work as providing “soup, soap and salvation,” eventually changing their name to The Salvation Army.

Today, the mission is the same and we’ve kept the Army structure. Our officers, or leaders, are ordained pastors.

We exist for one reason: to meet human need in Jesus’ name without discrimination

We assist approximately 30 million Americans in the U.S. annually

Globally, we serve the hurting in 131 countries around the world

*Please note that services are provided in the listed communities. The Toledo office will be able to provide the contact information.

*Please note that services are provided in the listed communities. The Toledo office will be able to provide the contact information.

Serving Toledo and the surrounding area

*Please note that a separate location serves Elmore. The Port Clinton office will be able to provide the contact information.

*Please note that separate locations serve Bradner Wayne and Walbridge. The Bowling Green office will be able to provide the contact information.

The History of The Salvation Army in Northwest Ohio

"Toledoans walking along Summit Street on a cool February night in 1887 were attracted to a street meeting being conducted by three men wearing the red and blue of The Salvation Army. These men were Capt. William Belk, Lt. John Fink, and Cadet George Ingersoll." The first street meeting in Toledo took place earlier that month at the corner of Superior and Jefferson, the site of the Secor Hotel.

Hostility was not unknown to the early pioneers as is seen in the excerpt from the Toledo Blade in October 1887: "... The Salvation Army... commenced its battle against the devil with their big brass drum and other instruments of torture to the... ear (but) the nightly occupants of Weber's Saloon... rushed out with tin pans and old wash boilers and joined in the chorus... (and then) threw their instruments... after the Army..."

The history of the Army in Toledo from that point is sketchy until 1937 when the newspaper carried information of the 50th Anniversary celebration conducted by Major Samson Hodges during November: then the 55th Anniversary at which time Adjutant Frederick Elliot was the commanding officer. In March of 1944, a high point of service was noted by the dedication of a Red Shield Canteen for World War II personnel stationed back in the locale. The Dedications was conducted by the Divisional Commander, Lt. Col. Wm. A. Spatig, and was attended by the commanding personnel of the various military installations in the area. At the time of the 60th Anniversary, the plaque currently affixed to the Secor Hotel on Superior Street commemorating the first Salvation Army street meeting in Toledo was presented by L. Jay Gifford to Lt. Col. Fred Malpass, then Divisional Commander. The Windsor Corps Band was featured in that celebration.

The years 1948-1950 were marked by the building program, the campaign sponsored by the Kiwanis Club with John H. Wright as the campaign chairman to build the current building on North Erie Street. The groundbreaking and cornerstone laying was attended by Mayor Michael DiSalle and Ray Loftus of the Chamber of Commerce, and the Dedication of the building was conducted by the Territorial Commander, Commissioner Donald McMillan, supported by Lt. Col. Edward Carey, the Divisional Commander, and many local notables including Robert Dunn of the Kiwanis Club, the mayor and chamber officials. Brigadier Clarence Ditmer was the responsible officer during this period.

There was a great 100th Anniversary National Congress held in Kansas City, Missouri, in 1980, to which 16 delegates from the Toledo Citadel journeyed. In 1980 work began on renovating the 30-year-old building. The rededication was conducted in May 1981.

Salvation Army methods have charged during 125 years in Toledo. In some of the earlier years, as many as eight officers commanded in one calendar year, but one of the commanding officers also stayed for nine years. When The Salvation Army work began, the program was primarily evangelistic with a meeting being conducted every night. The scheduled has changed and community service has increased, and with it community support and understanding. The building at 620 North Erie Street houses not only worship and fellowship programs, but also a casework and emergency assistance program, a recreation program for the immediate neighborhoods, and children in group activities, traditional Christmas programs, and Emergency Canteen.
The Adult Rehabilitation Center is located at 27 Moorish Avenue has been serving the community since the early 1900's at that location. Its program deals with socially disenfranchised men with counseling, work therapy, housing, feeding, and recreations and spiritual emphasis designed to give each individual an opportunity to make it back into the mainstream of society.

The commitment of those early pioneers who withstood mental and physical abuse to provide the gospel to those spiritually and physically needful remain the motivation for the present day forces of this Army of God which continues to provide service that never ceases. With Heart to God and Hand to Man, The Salvation Army in Northwest Ohio moves on to many more years of service. 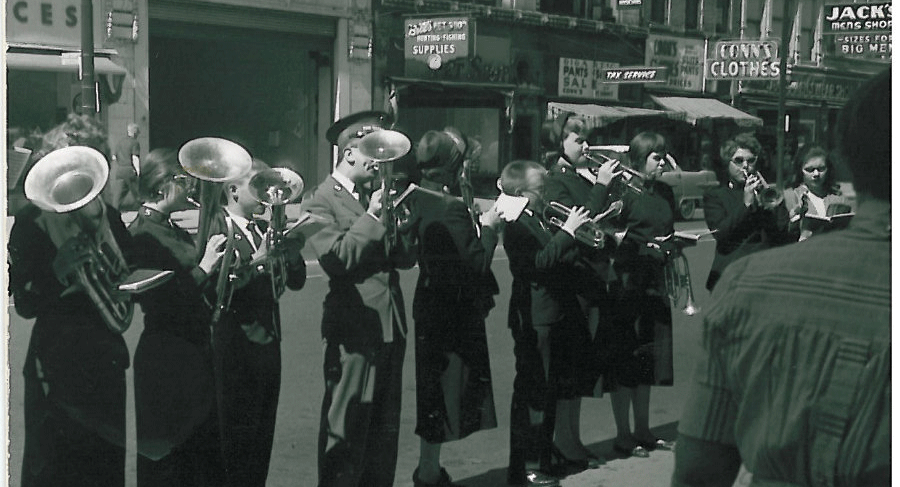