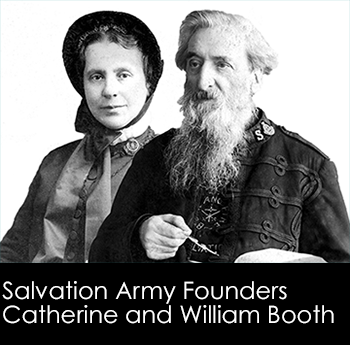 When a passionate Methodist minister in Victorian England took to London's slums to champion the poor and neglected, he began a movement that outlasted his lifetime and changed the face of philanthropy. The man was William Booth, and the organization he founded in 1865 came to be known as The Salvation Army. The Salvation Army's work in Central Ohio began in 1885.

The Salvation Army has been known by three names since its inception. William Booth's original name was The East London Christian Mission, which was later shortened to The Christian Mission. In 1878 it was renamed The Salvation Army-a tribute to Booth's "army of volunteers" who waged war against poverty and human suffering. The military metaphor stuck: Even today, members of the corps (or church) are called soldiers and ministers are called officers.

Initially, The Army was intended as a vehicle for evangelism, not social change. But Booth quickly realized that a poor man cares more about his next meal than the state of his soul. As a result, The Army launched numerous social welfare initiatives such as unemployment assistance, on-the-job training, homeless shelters, improvements in slums, safe working conditions in factories, and a bank that extended loans to the poor. In fact, Booth was such a visionary advocate for social reform that his ideas became a blueprint for modern social welfare practices.

Today, The Salvation Army is an international Christian organization that continues to confront poverty in all its forms, empowering the vulnerable to find dignity and hope through changed lives. In addition, The Salvation Army plays a major role in providing disaster relief. Salvation Army staff and volunteers are often the first on the scene and the last to depart, honoring a century-old commitment to serve those in need. The red shield continues to be a beacon of compassion, immediate aid, psychological support, and spiritual counsel to individuals and families whose lives have been disrupted or shattered by forces beyond their control.

In December of 1891, a Salvation Army Captain in San Francisco resolved to provide a free Christmas dinner to the area's poor. To pay for the food, he borrowed a technique he had seen when he was a sailor in England-he placed large collection pots in conspicuous areas near the ferry landing so that passersby would drop in donations.  In so doing, Captain Joseph McFee launched a philanthropic tradition that gained national popularity.

By 1897, the kettle effort had spread from the west to the east coast and resulted in 150,000 Christmas dinners for the needy. In 1898, New Yorkers hailed Salvation Army kettles as "the newest and most novel device for collecting money." One newspaper also observed, "There is a man in charge to see that contributions are not stolen."

Today, the homeless and poor are still invited to share holiday dinners and festivities at hundreds of Salvation Army centers. Captain McFee's initial charitable endeavor has evolved into one of the most recognizable traditions of the holiday season--the Red Kettle Campaign--which is The Salvation Army's largest fundraising effort. But kettles have changed since that first utilitarian cauldron was set up in San Francisco. Some new kettles have such devices as a self-ringing bell and even the capacity to accept credit card donations.  Kettles are now used in such distant lands as Korea, Japan, and Chile, and in many European countries.

Public contributions to the kettles enable The Salvation Army to bring the spirit of Christmas to people who would otherwise be forgotten-the aged and lonely, the ill, the poor, and inmates of jails and other institutions. Annually, The Salvation Army in the United States aids more than 6 million people at Thanksgiving and Christmas.