CONNECTICUT – Ten Connecticut mothers graduated from The Salvation Army’s Pathway of Hope initiative on June 18th and 19th, 2019. Pathway of Hope, which is available in Bridgeport, Meriden, New Haven and New Britain, is designed to help hard-working, dedicated families who simply do not have the means to get ahead in life on their own. It provides the guidance, tools, and assistance necessary to support struggling families along the continuum of growth to self-sufficiency.

1 Now the sons of the prophets said to Elisha, “Behold now, the place before you where we are living is too limited for us. 2 Please let us go to the Jordan, and each of us take from there a beam, and let us make a place there for ourselves where we may live.” So he said, “Go.” 3 Then one said, “Please be willing to go with your servants.” And he answered, “I shall go.” 4 So he went with them; and when they came to the Jordan, they cut down trees. 5 But as one was felling a beam, the axe head fell into the water; and he cried out and said, “Alas, my master! For it was borrowed.” 6 Then the man of God said, “Where did it fall?” And when he showed him the place, he cut off a stick, and threw it in there, and made the iron float. 7 And he said, “Take it up for yourself.” So he put out his hand and took it.

Major Duperree connected this passage with the lives of the graduates, “You’re all graduates of an outstanding program, Pathway of Hope. I’m sure some of you may describe your life as having many things gone wrong. It’s a snapshot of what happened at the school of the prophets. They didn’t have a decent meeting place to get together, so they built a meeting place. It was a poor group of people. They didn’t even have their own axes and they had to borrow equipment in order to do the work. They didn’t have much of a place to live or much of a place to learn. But they did have something. They had a plan. The good news of your life is things might have been going wrong, but you have a plan in your life, and it makes all the difference as we face the future.” 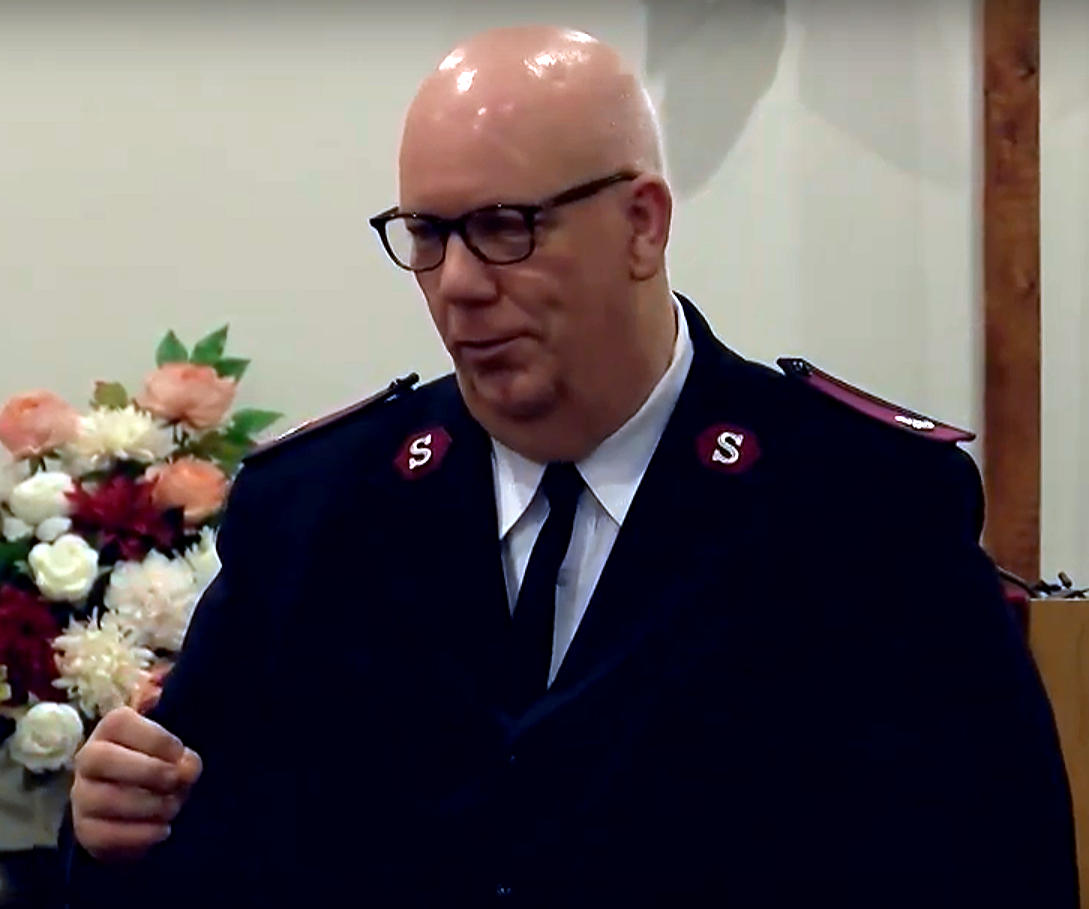 Captain Charles Adams, New Haven Corps Officer, has seen people come in looking for basic necessities, not really knowing where to turn or if The Salvation Army could help. “It’s really exciting to see people go through those initial assessments, where they get to monitor and see what their level of hope currently is and then to start seeing some of these goals getting checked off of their lists,” said Adams. As families go through the Pathway of Hope initiative, their hope index grows. “And then you get to something like commencement, and you see the smiles and you see the joy on people’s faces to know that they’ve accomplished something big in their lives. A lot of things they’ve accomplished today is just the beginning of what God really has in plan and in store for them in the future.” 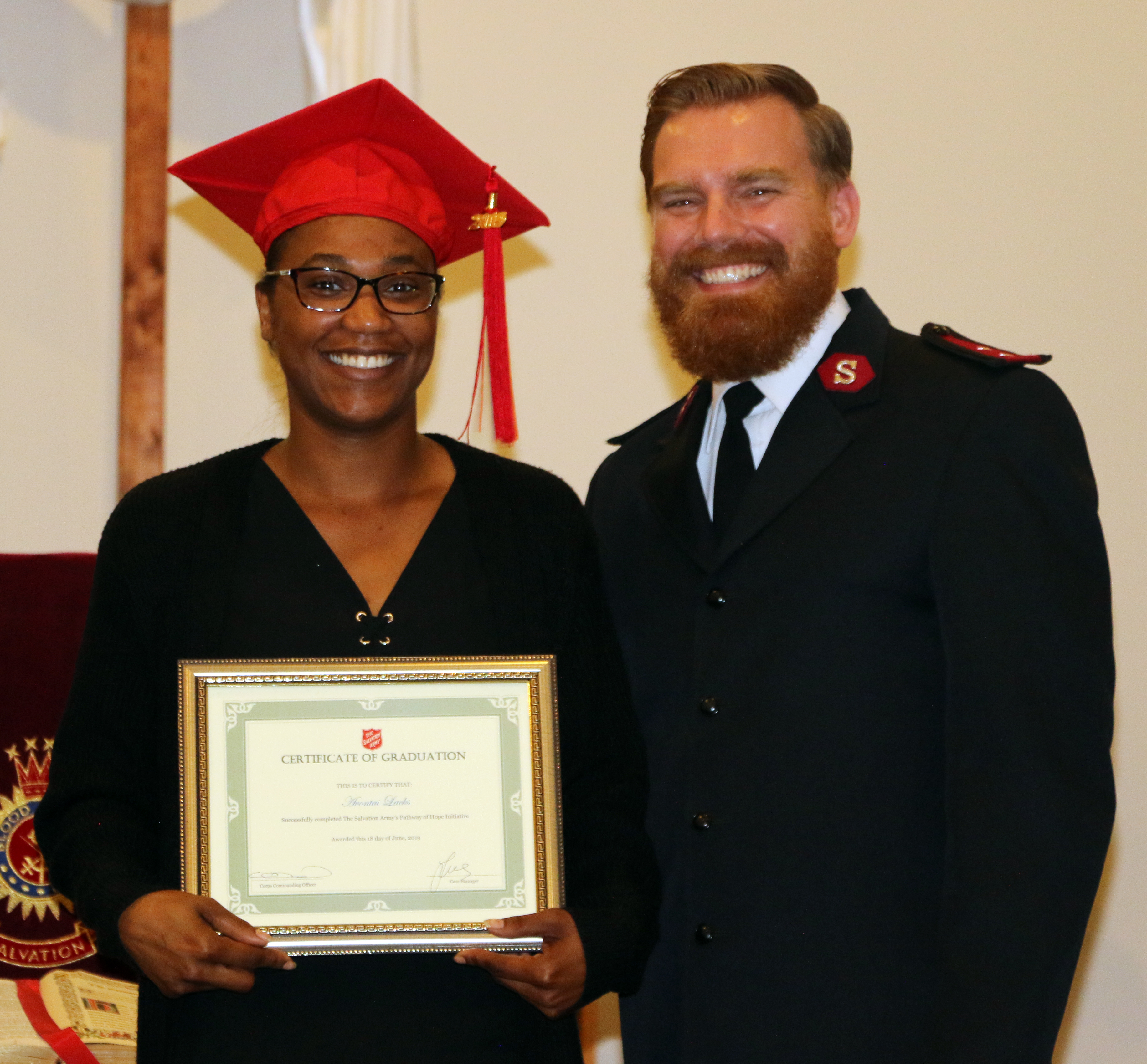 “I was kind of lost in the world. I came into this program because I needed help with a gas bill,” said Avontai Lacks, New Haven Pathway of Hope Graduate. “When I first started the program, I was definitely scared. I had a lot of fear,” Lacks recalled. “It’s not just someone giving you whatever you need, it’s yourself working toward whatever you need to accomplish. They just help you, they push you, and they give you the guidance.” Avontai is currently working on her high school diploma. “I’m very excited about it. All I can say is thank you.”

Shantai Rogers graduated from Pathway of Hope in 2018 and wants to give back to help others in need, just like The Salvation Army helped her. “I graduated last year with my Associates Degree and now I’m going for my bachelor’s degree in Human Services,” Rogers said. She is completing her internship at The Salvation Army in New Haven. “I want to give back. I want to help people who are in need – people like me. I’m no different from people coming through this door for help,” said Rogers. 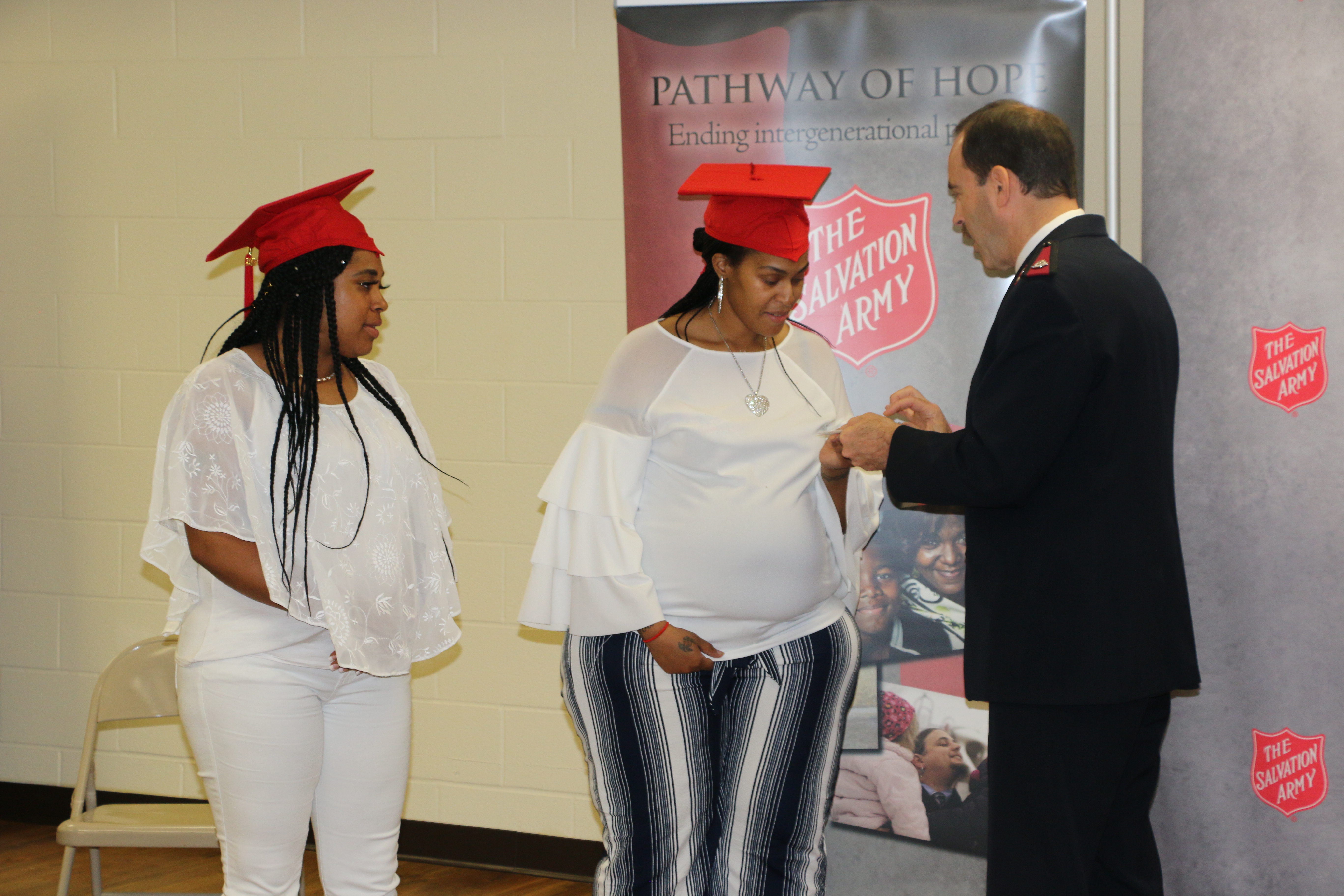 On June 19th, Major Gregory Hartshorn, Divisional Commander of The Salvation Army’s Southern New England Division greeted the Pathway of Hope graduates at The Salvation Army in Bridgeport. “I discovered along the way in helping people in city after city, wherever the Lord sent us is that there is no question in life that anybody can run into a mountain. The problem is, when we get to the base of that mountain, and we’re stuck there, we can’t see anything but the mountain. It’s huge, it’s impossible, we can’t get over it, we can’t get around it and we’re stuck. Some families have more resources than others and they can reach out and get some help when they hit the mountain. But sometimes, we don’t have those kinds of resources to turn to, and we are stuck there. We look around in our society today and there’s a lot of people stuck at the base of the mountain, not realizing that God has something incredibly better on the other side of that mountain. And you ladies are tasting that right now on your journey. And thankfully, there are people that help us like those at The Salvation Army with Pathway of Hope. Hope is not a thing. I want to propose to you that hope is in a person, and that person is Jesus Christ. And, if we put our trust in him, we can have hope through any situation.” 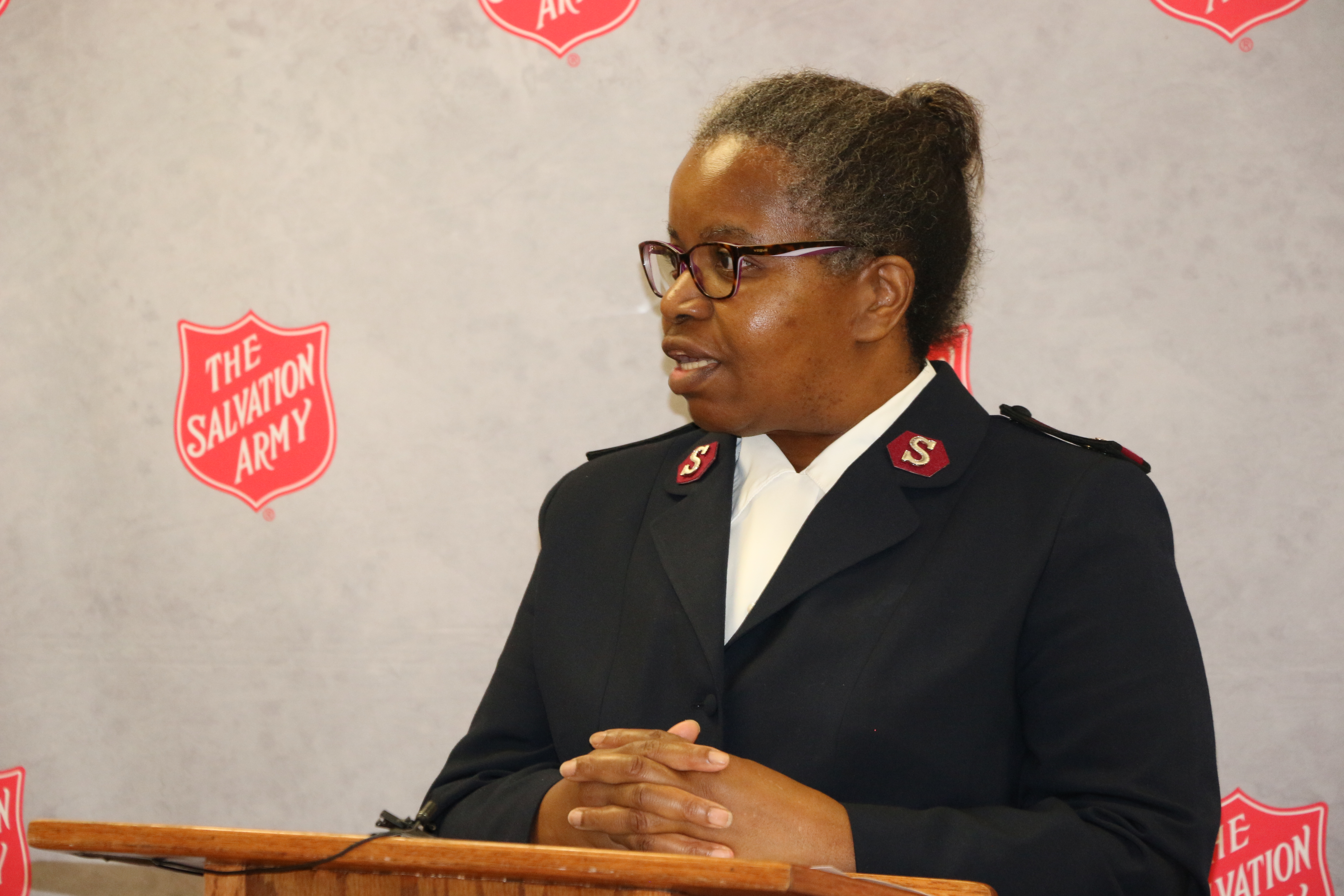 “We all know the phrase ‘Teach a man to fish and he’ll eat forever,’” said Major Lydia Pearson, Corps Officer at The Salvation Army in Bridgeport. “Well, people in Pathway of Hope want to know how to fish. They want to know how to own the lake, so they can own the fish.” Often, people will come in to The Salvation Army for help with food or utilities because they need immediate assistance. Lights may be turned off soon, or an eviction notice came in the mail. Some, however, are ready for a permanent solution. They are ready to change their lives for the betterment of their family. That’s where Pathway of Hope enters their lives. Salvation Army case workers come alongside families who are eager to work hard, set goals and attain those goals.

Shaqirah Williamson, a Bridgeport Pathway of Hope Graduate, came to The Salvation Army for help finding housing and employment but wanted to accomplish bigger goals. Her case manager Lisa Coulthirst recognized her ambition and enrolled her in the Pathway of Hope Initiative. “They helped me to write out my goals and my barriers – things holding me back,” said Williamson. “They helped me tackle those things.” She plans on gaining a cosmetology license in Connecticut and opening her own hair salon someday. “I want to make people feel beautiful,” Williamson said.

Mary Culbert, a Bridgeport Pathway of Hope Graduate, was employed but didn’t have housing. She was living in a one-bedroom apartment with her mother and three children. “I felt bad as a parent that I couldn’t provide them the basic things they needed to survive,” said Culbert. One day, her son came home with his school picture, but was upset that he didn’t have a wall to hang it on. “That made me feel like I was failing my children as a mom,” Culbert said. She decided to make a real change and went to The Salvation Army to meet with her case worker. They worked together to set goals and step-by-step, Mary worked to attain those goals. “I had to get out and look for an apartment, work late and get up early. It was not easy,” she recalled. Now, Mary’s family has their own place with their own walls to hang pictures on, including her son’s school photo. “To me, I feel proud for that,” Culbert said. “The help that they gave me was imperative to what I needed. I didn’t know where to start, where to go. God sent them to me and me to them so they could help me better myself and my children. I’m so grateful.” She encourages others to have hope and keep going. “Don’t give up, because I didn’t give up. You can make anything happen. Anything is possible.” 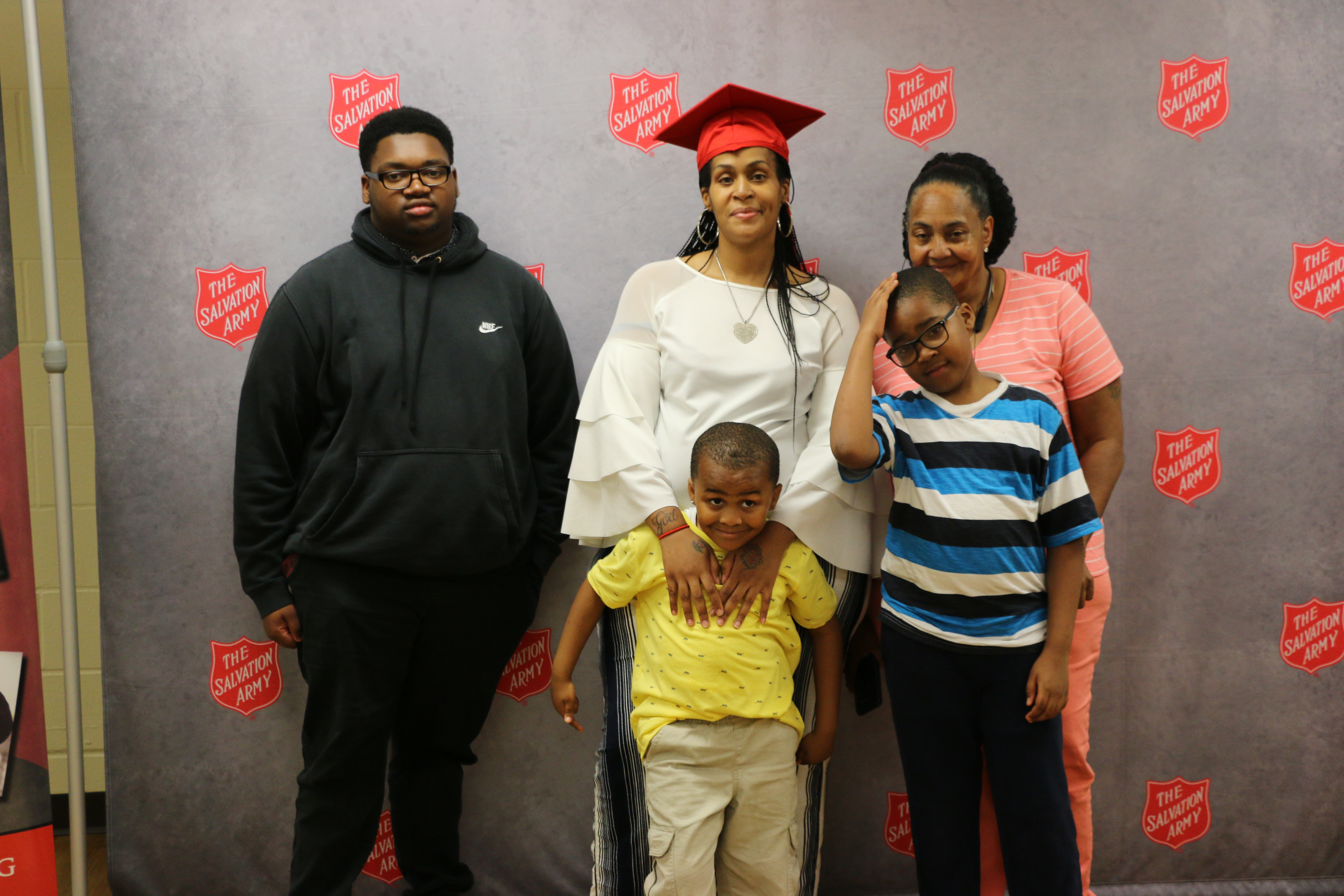 Pathway of Hope is a strengths-based initiative. That means it focuses on possibilities rather than problems. Through Pathway of Hope, The Salvation Army help families identify the skills and assets that they bring to the table before collaborating with them to make a plan utilizing those very strengths to improve their situation. 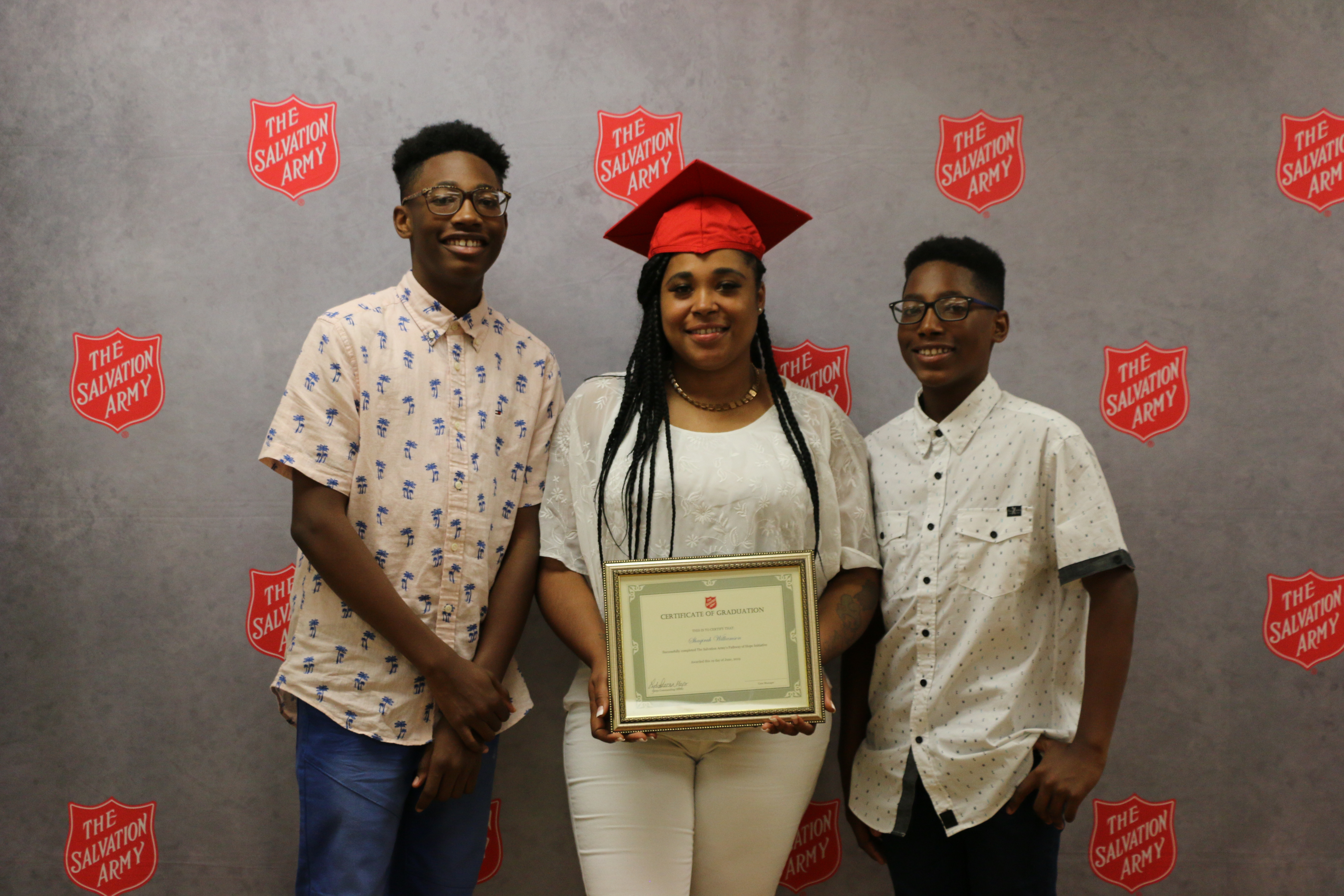 Using a case management approach with each client, Pathway of Hope is designed so that each family receives a personal plan of action tailored specifically to meet their needs. This plan not only helps them to achieve important goals across a broad spectrum of areas in their lives, but also provides them with a “go-to person” at The Salvation Army who serves as a “one-stop shop,” connecting them with resources and holding them accountable for the goals that they themselves have set.

Find out more about Pathway of Hope.