*Classes are not held during Summer months.

The Salvation Army's Culinary Arts Training Program is a 10-week course serving the Dorchester/Roxbury community and students in need led by Chef Timothy Tucker. Tucker originally launched this popular program at The Salvation Army Center of Hope in Louisville, Kentucky in 2005 before bringing it to the Boston Kroc. Today, his successful formula has transformed the lives of hundreds of Boston-area non-traditional students who received free job skills training in the culinary arts.

The Salvation Army's Culinary Arts Training Program teaches knife skills, food terminology, kitchen safety standards, recipes, and effective work performance. Our strong community partnerships help place graduates with top chefs in their local communities and beyond. At the program’s heart is a belief in healing lives from the inside out. That starts with fresh, healthy, mindfully prepared food.

The program provides all the culinary training needed to become employed in a restaurant or commercial kitchen, life coaching, and employment support for those who are ready to commit to a new career.  Students also graduate with college credits and a Junior Apprenticeship certification from the Commonwealth of Massachusetts. The services are provided free of charge to our students.

While there is no cost to students to participate in the Culinary Arts Training, the average cost per student to run the program is $4,000. The program succeeds because of the incredible spirit of our students and instructors and the generosity of donors who underwrite this cost. As an additional fundraising effort, prior to the pandemic, The Boston Kroc Center hosts weekly (except in Summer months) lunches prepared by the culinary students. This initiative titled "International Feast Fridays" provides an education and cultural experience to the students as they venture into researching various cultures, countries, and regional foods. By creating carefully prepared cultural dishes from around the globe, the community has the opportunity to try a different spin on lunch and the appetizing work of the culinary students.

Applicants must be 18 years of age. 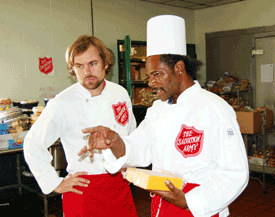 Timothy Tucker grew up in Springfield, Illinois and attended culinary school at Sullivan University in Louisville, Kentucky. After graduating from Sullivan, he went on to work as a PM line cook at two upscale restaurants in Dallas and Seattle.

The restaurant work was followed by a brief stint as a research and development chef for a frozen-food manufacturer in Louisville where he learned first-hand all about the chemicals and additives that go into processed foods. It is here that he first realized how far his passion was for cooking with healthy un-processed foods.

After his short stay in the “culinary industrial complex” Timothy took a job as the head chef at Fox Hollow, a natural medicine facility on an organic farm just outside of Louisville. There, he was able to gain great experience in growing; farming and cooking organically where he began to develop a culinary philosophy that would go on to govern the next ten years of his life and work as a chef.

In 2005, Timothy began a job as Executive Chef at The Salvation Army’s Center of Hope Meal Service, where he cooked over  400 meals for  low-income men, women and families, each week. After learning about a kitchen skills training program at a Salvation Army Program in Los Angeles, he was inspired to create my own Culinary Training Program at the Center of Hope. He designed this 10-week course to help people get out from below the poverty level and into a culinary career.

After five years at The Salvation Army in Louisville, he was invited to develop and run a similar program at the Miami Culinary Institute at Miami-Dade College. Recently he just joined the Salvation Army Kroc Center Boston as the Culinary Arts Training Manager.